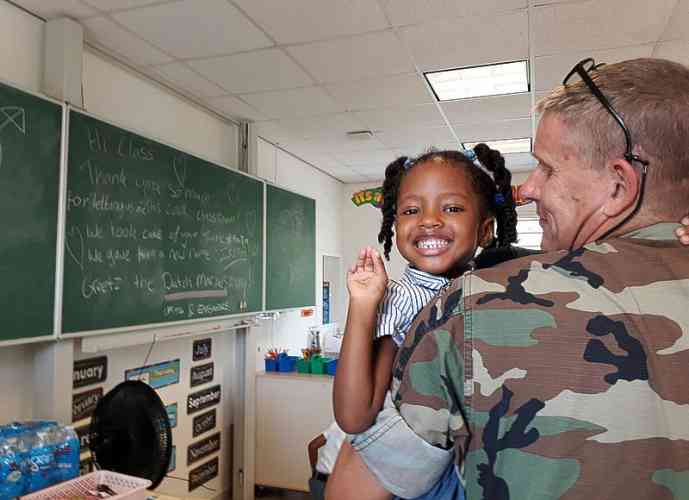 THE HAGUE–The Dutch Defence has acknowledged that it underestimated the effects of the destruction caused by Hurricane Irma in St. Maarten early September 2017, and the impact that the natural disaster had on public order and safety.

Commander of the Dutch Naval Forces in the Caribbean, Marines Brigadier Peter de Vin indicated this in the June edition of the Dutch Navy personnel magazine Alle Hens. According to De Vin, the Navy did not realise soon enough that especially the local government and law enforcement agencies were also victims in this disaster.
“I am honest about that fact, that we somewhat underestimated the situation at the front. Vigorous handling was difficult in the first 48 hours with lootings as a result. On the request of the local authorities, our priority was to offer assistance and to assess the damage. With today’s knowledge, this [priority – Ed.] should have been public order and safety,” De Vin said.
Stores were especially hit hard by the looting. Looters did not only plunder goods from damaged supermarkets, stores and schools, but they even forced their way into the stores on Front Street that the hurricane had left intact. The looting on St. Maarten became world news and tarnished the island’s reputation as a relatively safe vacation destination.
De Vin’s statement is remarkable because Commander of the Dutch Naval Forces, General Rob Verkerk, in September last year, vehemently denied the allegations of then St. Maarten Prime Minister William Marlin that the Dutch Marines had done nothing to stop the looting. “My people have acted within their boundaries of capacity from the very first moment,” stated General Verkerk at the time.
In the Alle Hens magazine article, Commander de Vin was also asked how he experienced the large Defence operation in connection with Hurricane Irma. “This was beyond imagination. Hurricanes have hit St. Maarten, Saba and St. Eustatius before, but nobody had expected this.”
De Vin referred to Hurricane Irma as a “fierce force of nature.” “Despite the disaster, it was a unique operation for Defence. We worked hard and were able to assist many people. That gives you energy as a military man,” he said.