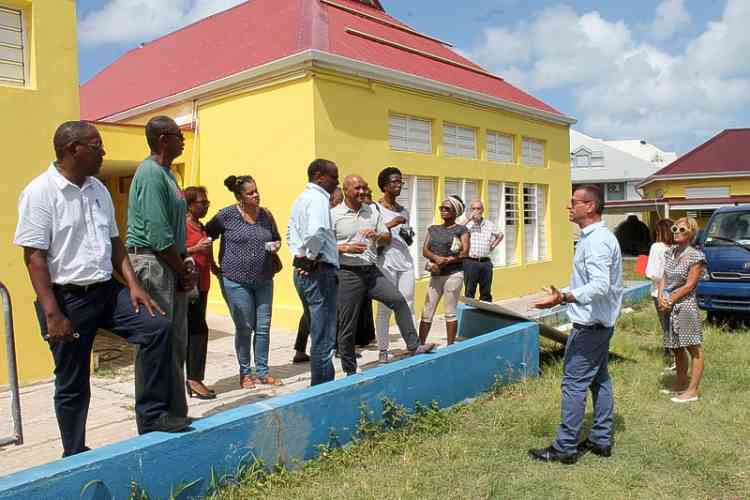 Christian Climent-Pons, the appointed official in charge of the reconstruction of schools, briefs President Daniel Gibbs and the delegation on reconstruction progress at Simeon Trott Nursery School in Concordia. (Robert Luckock photo)

MARIGOT–A delegation from the Collectivité led by President Daniel Gibbs and Vice-Presidents Annick Petrus and Steven Patrick inspected some of the schools on Friday to see progress of reconstruction ahead of the start of the new schoolyear on September 2.

Repairs carried out by the Collectivité’s Technical Services made it possible for all primary schools to operate in close-to-normal conditions from the start of the schoolyear in September 2018. The reopening of certain secondary schools required more serious work involving the intervention of design offices and qualified companies.

Based on their knowledge of the sites acquired during emergency response, the Collectivité’s Technical Services staff worked effectively with the design offices during the programming of the heavy work. Phase 1 was carried out during the 2018-2019 school year during the holiday periods, when establishments were not occupied.

Phase 2, which is currently being implemented, will see all establishments fully integrated and rehabilitated by the end of the school holiday in 2019, for delivery of buildings for the start of the 2019-2020 schoolyear.

Due to the technical complexity and scale of investments, the Lycée and Cite Scolaire in La Savane will be completed at the beginning of the All Saints’ Day (Toussaint) 2019 holiday.

Intervention in an occupied school environment creates constraints in terms of accessibility, and security measures did not allow for intervention during the schoolyear. But authorisation to close the establishments partially on June 8 made it possible to carry out the work during the summer holidays. Finishing touches will be carried out without impacting the progress of school activities.

Gibbs said at the end of the visits on Friday: “It is with satisfaction that we are seeing the light at the end of the tunnel regarding the reconstruction work in all these schools. College and high school students and teachers will be able to return to school in the best conditions, just two years after the destruction of these structures.

“The Collectivité has focused on this reconstruction for two years. Most of the work will be completed by the end of this year and represents a sum of more than 14 million euros spent from European Social Funds (ESF). I would like to thank all those persons who had a constructive role in this phase of school reconstruction. There is still a lot to do and my whole team is mobilised to succeed for St. Martin.”