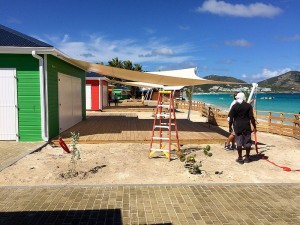 MARIGOT–Tuesday’s second attempt at resolving three Orient Beach local proprietor’s complaints is expected to be another marathon session, if grievances of the Saint Martin Wake-Up collective are also taken into account.

Last Wednesday’s over four-hour meeting ended in deadlock after no agreement was reached on the tenant’s demand for nine months of free rent to make up for time lost; one of several contentious negotiating points that sparked a second day of protest.

Tenants say this is based on loss of revenue during nine months of construction (June 2015 to February 2016).

They added the Collectivité needs to complete what they claim is an “unfinished” project, indicating some 20,000 euros or more has to be put into each restaurant to complete missing infrastructure, such as a deck covering, or allow the tenants to deduct those extra expenses on future rent.

They add there should be a difference between rent for high season and low season and describe the 2,200 euros rent year round as “vindictive.” They want the same delay in payment of rent to October 1, 2016, as offered to the metropolitan tenants.

According to district one representative Steven Patrick the disparity in price compared to the former situation before Hurricane Gonzalo is because at that time the old rent of 450 euros was only for the land but now the rent is for the land and the restaurant.

The temporary occupation permit AOT is granted for only three years and tenants want it extended to five.

“After making this considerable start-up investment coupled with payroll, social service expenses and utilities, marketing, etc., it is very unlikely we will see a return on investment in just three years,” the tenants said in their preamble. “There is no guarantee the contract will be renewed.”

Saint Martin Wake-Up says its demands refer to “commitments not kept” by the Collectivité contained in the Memorandum of Understanding (MOU) dated October 22, 2015. It said the Collectivité committed to “change the competency field of the 50 pas Géométriques Committee by including the verification of titles and pricing issues.”

“We demand that this Committee be convened within two months to revise and decide on the symbolic purchase pricing of the parcels, as promised about 50 years ago, and not “the market pricing” as recently imposed. The Collectivité also committed “to guarantee the proper functioning and to better take into consideration the grievances of the Community Councils in respect of the organic law. We therefore demand that the Collectivité respect and take into consideration the grievances and projects of the Community Councils.”

On the economic, financial and social situation, it said: “In order to secure the social balance of our island society, it is crucial to put an end to the deplorable loss to our indigenous people compared to the benefits enjoyed by those coming in from elsewhere.

“We therefore demand that the following measures be implemented: Stop the eviction of the St. Martin lessees, who are conducting business at the L’Esperance Airport in Grand-Case; stop the systematic replacement of St. Martin employees all over the island by others who are “imported”; control the regular flow of seasonal workers, above all those coming from France, with regard to labour laws; revise the tax rate of revenues from the Revenu Solidarité Active (RSA) “Socle” towards decrease or even elimination thereof; exercise efficiently the competences of the Collectivité relative to immigration control as provided by the organic law and extend the field of competences of the Collectivité in matter of control of entry and stay of foreigners; stop the waterfront project in Marigot being given away in concession to outside companies without any benefit for St. Martiners.”

Saint Martin Wake-Up supporter Patricia Chance-Duzant commented: “We can’t work in our own country or run the show, or reap any of the benefits. Instead of protecting the pioneers who created this country, the Government is giving away the big projects to outsiders.

“They should be training the people to take over these technical jobs that will be coming in. We can’t continue to be economical slaves to outsiders. Government is supposed to be taking us forward to create a future for our children, and that’s what the people are not seeing.”

Saint Martin Wake-Up also deplores “the disregard shown for the decree from the President of the Territorial Council Aline Hanson prohibiting the commercial use of Grand Case Beach.”

“We demand the immediate enforcement of this decree. Have any investigations, reports of infractions and violations been done? Do we have any results of condemnations? What is the value of such an important decree without its implementation? We encourage all inhabitants of Grand-Case to preserve this environment and restore its natural aspects as a beach for all residents.”

More issues too numerous to mention here are listed under headings for Consumer Protection, Prevention and Security, and Protection of Heritage.