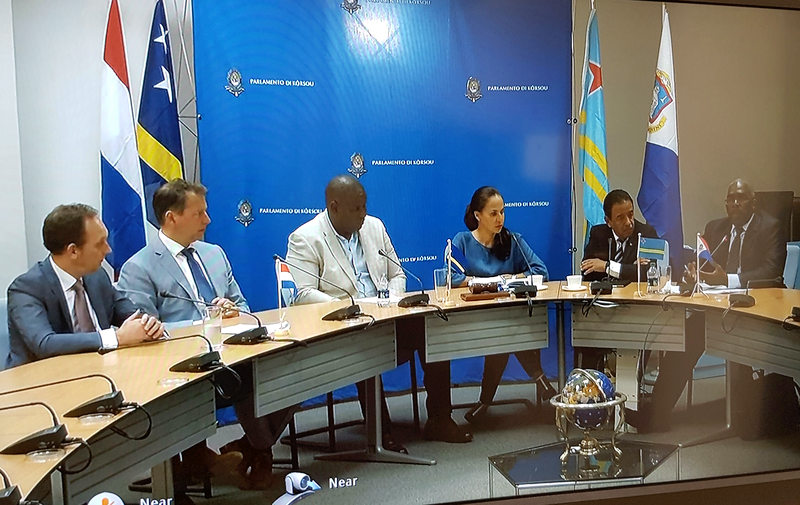 ~Dispute arrangement before end of 2017 ~

WILLEMSTAD–Delegation representatives of the Inter-Parliamentary Kingdom Consultation IPKO in which the Netherlands, Curaçao, Aruba and St. Maarten participated, look back at a successful IPKO. That’s what they made known Friday morning in the closing press conference.

Present were for Curaçao, Giselle McWilliam and Humphrey Davelaar, for the Netherlands Jeroen Recourt and Ruard Ganzevoort, for Aruba Rene Herdé and for St. Maarten Rodolphe Samuel.

During the gathering they discussed the ideal kingdom in 2040; it was an official agenda point. Recourt said the future of the kingdom is difficult to determine.

“In our own delegation there are big differences on the future of the kingdom, but the relation must have a basis: recognise us, respect us and see us. If we can organise that we can realise everything.”

Just as McWilliam had done in her opening address, Recourt said he too missed a broad-based vision or standpoint. “We must decide where we want to go. We are using too much of an ad-hoc approach for solving problems and have no view on the future.”

He added that because of the informal atmosphere and the removal of pressure as no decision list had to be made, the talks were different and the parties gained insight into each other’s standpoints. Recourt said he’s happy the IPKO continued and that the meetings met the expectations of the Dutch delegation.

Herdé, on half of the Aruban delegation, was able to conclude from the IPKO that although parties have different opinions, they share more or less the same ideas on how their country should be organised. This makes him optimistic for the future.

He was also impressed by a working visit to “Hospital Nobo Otrobanda” (HNO) and is happy it was on the agenda, as both Aruba and St. Maarten are in the process of constructing new hospitals. “It’s clear that there are possibilities for cooperation in the field of health care.”

Herdé further emphasised the need to tackle the so-called democratic deficit, whereby parliamentarians of the Dutch Caribbean can’t submit draft Kingdom Laws to Parliament in the Netherlands. “This is something we indicated to the Dutch

delegation to work on. Aruban parliamentarian Andin Bikker is busy with it and has support from the Parliaments of all three islands,” he said.

Herdé agreed with Courtar that dispute arrangements are needed quickly, “We realise this regulation won’t come before the Second Chamber elections in March, but it’s been a long process that should be completed fast, this year still. I am convinced that an arrangement is necessary for the disputes that arise. There must be a procedure to solve problems before they become a conflict,”

St. Maarten delegation member Samuel was positive in this edition of the IPKO and optimistic about the future of the kingdom. I see us as different people with a similar history; this history means that we will be together much longer than 2040.”

He is of the opinion that topics discussed in the IPKO must be taken back to their respective governments by each delegation. Just as Herdé, he is glad to see the new hospital and its progress, emphasising that the counties can and should continue to cooperate.