Home Local News Designs for waterfront development project to be presented in July 2021... 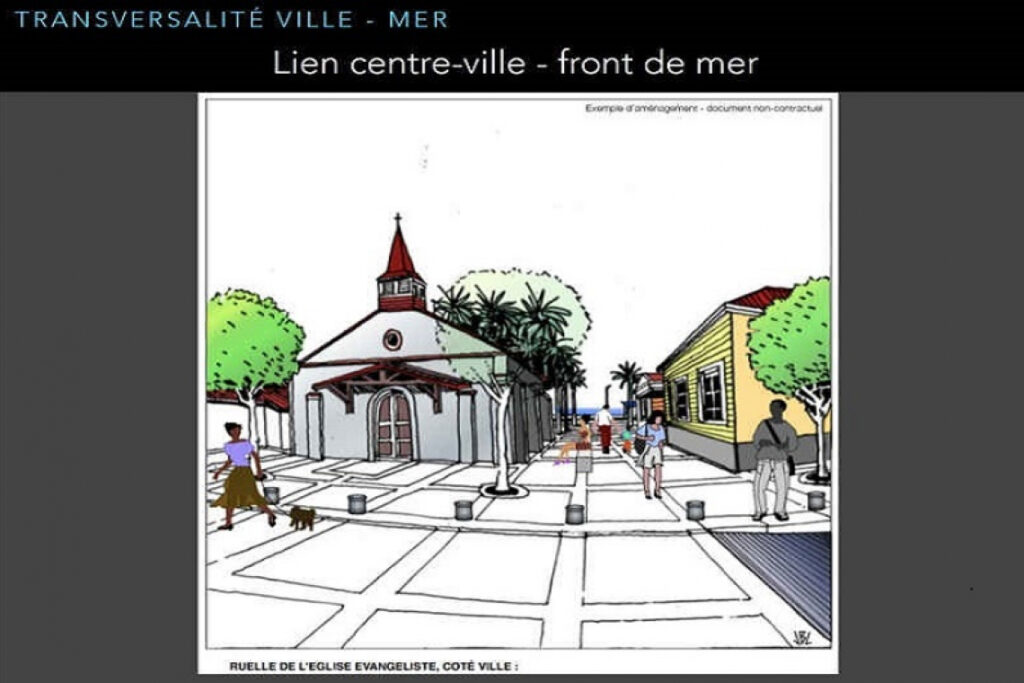 One of the early graphics showing what the area opposite Palais de Justice on Rue de la Liberté in Marigot might look like in relation to the waterfront.

During the presentation of the 2021 budget at the plenary session of the Territorial Council Gibbs made a point of presenting the redevelopment project for the Marigot waterfront, for which the architectural competition was launched on December 18 last year.

The competition phase is aimed at selecting the future development project. The jury of the competition is in charge of analysing the proposals and will present the designs of the candidates to the population in July 2021. The final project will then be selected within the framework of a broad public consultation.

Through this redevelopment, from the Galisbay car park to the Tourism Office roundabout, the Collectivité wishes to create a quality area, as much for operators of the public infrastructure that will be built and made available, as for the population and visitors who will enjoy the areas.

The specifications foresee a four-year development, with five phases of action:

1. Development of a landscaped promenade in front of the cemetery;

3. Development of a green square in front of the ferry terminal (currently being renovated);

4. Development of a commercial area, with a market hall: street vendors, craft stalls and the food market (24 stalls and 10 stores); and

5. Rehabilitation of the amphitheatre (kiosk) to host cultural events.

The current containers installed on the waterfront are temporary installations. They will eventually be removed from this area to make way for an entirely new, permanent infrastructure.

Candidates for the architectural competition are invited to design a welcoming, functional waterfront, with completely redesigned traffic and parking facilities, green spaces in keeping with the area, street furniture and night-time lighting.

The candidates must also think of developing a more open-plan city centre so that it is integrated into the redesigned waterfront, with adapted developments and openings to Rue des Amandiers, Rue de l’ Anguille, Rue de l’ Eglise Méthodiste and Rue de la République for a better flow of pedestrians. These will help to reinvigorate the downtown area and create a coherent living space in the heart of Marigot.

It should be noted that a parallel project to promote tourism of the historical sites of Marigot, including Fort Louis, is currently under consideration and will be integrated into the redefinition of the waterfront, to give overall coherence to the development project.