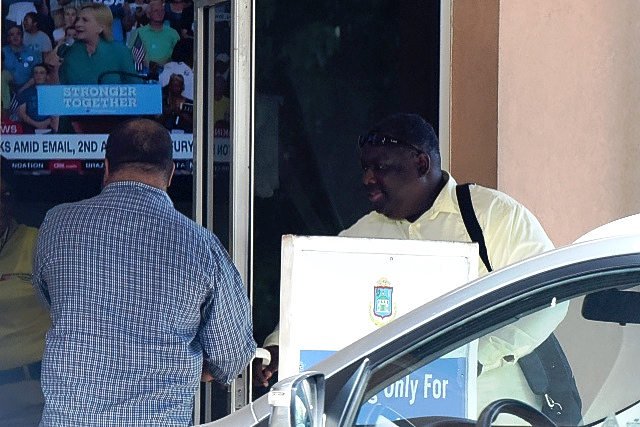 Authorities searched the Immigration and Border Protection (IBP) Service and confiscated devices there.

Aron’s home also was searched by the officers, who took cell phones, documents and his personal computer. At the time of the searches, Aron was in a civil court case he brought against Minister of Justice Edson Kirindongo in relation to his immediate suspension. The investigation started in May and continues.

The Prosecutor’s Office issued a release on Wednesday announcing that the criminal investigation code name is “Robalo.” The search was led by the Judge of Instruction and a Prosecutor. Important documents, digital data-carriers and telephone(s) were confiscated.

Aron is suspected of human smuggling committed on May 5 and other criminal offences related thereto. Prosecutor Maarten Noordzij and Aron travelled to the Dominican Republic in April on a working visit. Noordzij came back to the island days before Aron decided to head back home.

Aron arrived at Princess Juliana International Airport SXM on May 5 with a woman from the Dominican Republic and walked past Immigration officers, informing them that he had the situation under control. The Immigration officers did not comply with Aron’s statement and told him to follow correct procedures.

Aron decided to contact the acting head of Immigration and informed him that he was being harassed by the Immigration officers. The acting head allegedly informed the officers that everything was under control and that Aron could pass with the woman.

This did not sit well with the Immigration officer and she immediately contacted her union to file an official complaint with it about what had transpired. Minister Kirindongo met with the union, which informed him of what had taken place on May 5.

Kirindongo ordered a full investigation of the incident and filed an official complaint with the National Detectives thereafter. Aron was suspended pending the outcome of the investigation.

No arrests have been made in this investigation so far, but it is in full swing, so possible arrests cannot be ruled out.