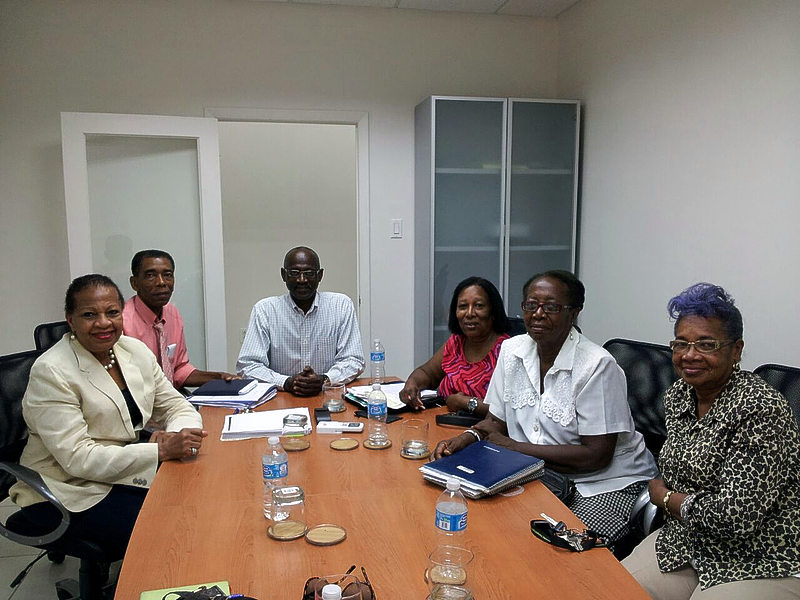 SMDF Director Keith Franca (centre) sits with the board of Helping Hands Foundation, one of the Fund’s first clients.

CUL DE SAC–St. Maarten Development Fund (SMDF) recently celebrated its fifth anniversary of working on the country’s social development. The financing agency came into place on May 30, 2012, and was created to replace Dutch agency AMFO. It supports a number of non-governmental organizations (NGOs) working actively to improve the lives of St. Maarten’s most vulnerable groups.

SMDF has directly funded the activities and operations of some 45 NGOs – ranging from after-school activity programmes to foster homes, a youth brigade, senior citizens programmes, rehabilitation centres, crisis shelters and a youth home for at-risk youth.

The programmes and projects supported by SMDF in its first five years have positively impacted thousands within the community, said the Fund, led by Keith Franca since its inception.

Guided by the organization’s “Policy Plan 2013-2023: Contributing to a Society that Cares,” Franca has focused SMDF’s financing activity where it is most needed, in the areas of youth development, social care and support, senior care, poverty alleviation and gender support.

SMDF has “efficiently and effectively” financed more than NAf 11 million in social development. The financing provided has allowed the supported NGOs to meet the needs of those they serve.

SMDF’s financing has provided meals for hundreds of seniors and families, safe spaces for children after school, learning material for literacy courses, a shelter for victims of domestic abuse and access to information about healthy living for teenagers.

Additionally, through SMDF’s financing, many of the NGOs supported were able to hire staff for their operations, resulting in SMDF’s contribution to employment and other spin-offs.

Sharing the same sentiment, SMDF Supervisory Board of Directors President Richelda Emmanuel stated, “We can only build a strong nation if we also invest in the development of the most vulnerable in our society.”

Emmanuel further affirmed that the development of St. Maarten’s most vulnerable was the key goal of establishing SMDF five years ago. “Through SMDF, we are actively working on the human aspect of our community and national building,” stated Emmanuel.

In light of this, Franca spoke of SMDF’s plans to seek out additional sources of donor funds both locally and internationally. “While I do believe that SMDF has helped to make great strides in social development, we continue to see instances of social need and hope to fill these voids, but that will only be possible with more funds,” stated Franca.

The increase in funds according to Franca, will allow SMDF to support even more organizations and facilitate further social development.

Franca envisions SMDF’s growth over the next five years and beyond as the organization will continue to be steadfast in its commitment to St. Maarten’s social development.