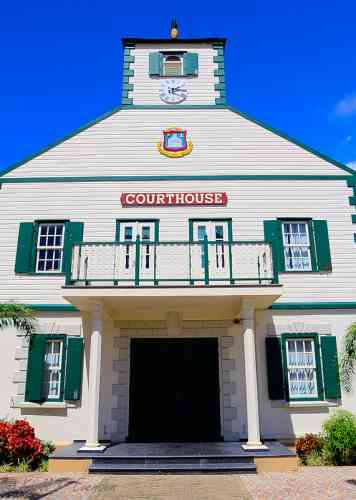 PHILIPSBURG–The Joint Court of Justice of Aruba, Curaçao, St. Maarten and of Bonaire, St. Eustatius and Saba presented its annual report to the media on Tuesday. The 2018 edition of the annual report has as theme “Development.”

The focus of the Court in 2017 and 2018 was on professionalisation, quality and customer friendliness under the main theme “House in order”. In reality, a house is never finished, as there will always be items that still need to be repaired, replaced, modernized and maintained, the Court stated in its report.

“The Joint Court of Justice is constantly evolving and this is why this theme was chosen for the annual report,” the Court states in its report.

Openness is important to maintain citizens’ confidence in the judiciary and making (anonymous) decisions public is part of this policy, the Joint Court states in its annual report.

The Court deals with many cases every year. Three cases that have made an impact on the Dutch Caribbean islands in one way or another are highlighted in the annual report.

The case about the suspension of payment of airline InselAir International BV was closely monitored on all islands and countries in the region because it affected connectivity.

The acquittal of a suspect in Bonaire who had performed sexual acts with a woman who at that time was under the influence and in a state of diminished consciousness, caused the adaptation of a penal law article in the Caribbean Netherlands.

In the annual report, extra attention is paid to case law in Saba and Statia. Acting Judge Monique James-Brown and recorder Rianna Bennett talk about their work and experiences in Statia in a video interview. Former Acting Judge Sydney Sorton also speaks in a video interview about his career in Saba. Vice President of the Court in St. Maarten Peter Lemaire explains the services provided to Saba and Statia.

The Joint Court said it continues to strive to attract more local judges. Five judges were in training at the Court in 2018. Two of them have successfully completed their training and have been appointed members of the Court. Two of the other three judges-in-training went to the Netherlands in 2018 for further professionalisation in a Dutch Court and to follow courses at the Judicature Study Centre Foundation, the training institution for the Judiciary and the Prosecutor’s Office.

Internally, the Court has continued to work on digitisation and on quality improvement. From January 2018, all civil and administrative cases were filed in the Court’s new case-registration system, which offers the possibility for better case management and keeping track of financial transactions such as court fees.

Criminal cases in St. Maarten have also been entered and processed digitally since June 2018. The Bonaire branch followed by mid-October 2018.

Due to the use of digital criminal files, judges have to travel less frequently to handle a case at another location, which saves the judges time and the Court travel expenses. Working digitally also makes the cooperation between Court branches easier.

The Joint Court of Justice has four branches, but serves all six islands. In Aruba, the Court has entered into an agreement with Aruba about the use of the court building, including maintenance and reimbursement.

The Curaçao branch is struggling with structural problems. After thorough investigation, it appeared that a major renovation of the entire building is needed to solve the problems. A basic cost estimate for the renovation was submitted to the Ministry of Justice in 2018.

Improvements have been made to the iconic Courthouse in St. Maarten and the outbuilding annex, the Joint Court said. Both buildings were damaged by Hurricane Irma in September 2017. However, more repairs are needed. The building no longer meets the functional requirements of a modern and safe courthouse, it was stated.

The Bonaire branch is still looking for a new location. The Joint Court is considering two options and a final choice be made later this year.

Housing is still a tricky issue in Statia and Saba, but that will change soon, the Joint Court stated. In Statia, the Court and the Prosecutor’s Office will have their own locations in the former pharmacy. In Saba, the Court will not obtain its own building yet, but a counter will be opened in the government administration building.

The Court achieved a positive result of NAf. 275,000 in 2018, according to the annual report. This result is caused by incidental income of NAf. 689,000. If the result were corrected for these incidental benefits, the Court would have had a loss of NAf. 414,000.

This loss can be explained because the Court had a cutback of approximately NAf. 1.3 million guilders in 2018. The board has implemented a strict cutback policy on the hiring of external parties and the operational cost to eliminate the deficit. “This has largely succeeded,” the Court stated. Also, this year the general public can access the digital interactive annual report, including several video interviews, online at