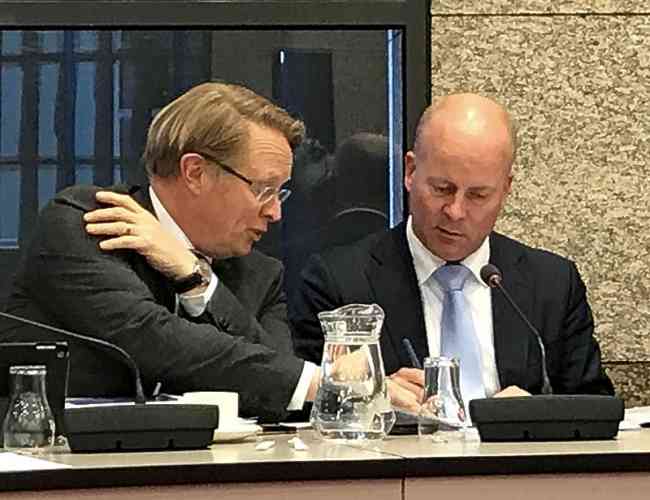 THE HAGUE–The situation of lawlessness, the mismanagement, both administratively and financially, and the level of intimidation that the current St. Eustatius Government has displayed is totally unacceptable and required intervention by the Dutch Government, according to State Secretary of Home Affairs and Kingdom Relations Raymond Knops.

The Dutch Government submitted a law proposal on Monday that will dissolve Statia’s Island Council and send home the members of the Executive Council. The Dutch Parliament is expected to pass this emergency legislation today, Tuesday. The Dutch Government will appoint a representative who will take over the authority of the local government for the time being. (See related article)

“The situation was bad, but it has worsened, despite the earlier measures,” said Knops during a debate with the Second Chamber on Monday. He said the situation was “extremely worrisome,” also because the Statia Government “pretentiously” ignored laws and regulations, putting aside the Kingdom Government Representative (“Rijksvertegenwoordiger”). “A situation of lawlessness has evolved. This is completely unacceptable and required acting in the people’s interest.”

The Dutch Government’s decision to directly intervene followed the advice of the Committee of Wise Men. In its report titled “Near or far, a world of difference,” publicly released on Monday, the Committee wrote: “The situation almost resembles a coup d’état whereby the Statia Government has consciously chosen for a greater distance from the Netherlands and factually broke the ties with the Netherlands.”

The conclusion of the Committee: “Lawlessness, nepotism to a far extent, ignoring of other authority structures, the more-or-less monopolising of radio and TV air time for own political purposes, the desire to control the civil service, intimidation, threats, pressure and insults. They are more classic forms of a dictatorship and the striving for personal power than of expressions of good governance.”

Knops said on Monday that The Hague had tried in many ways to restore good governance in St. Eustatius. “We pretty much exhausted all tools in the toolbox. Intimidation, discrimination, randomness, lawlessness do not belong in our democratic state of law,” he told the Second Chamber.

He acknowledged the criticism of the Committee of Wise Men and the Second Chamber that the Dutch Government had let the situation evolve for too long. “But that is no legitimate reason for allowing this way of governing of the Statia Government where might rules over right and the opposition is completely ignored.”

Knops promised to restore the situation within the shortest possible time, to return to an elected government when this was possible and not to let the intervention drag on unnecessarily. “But there is a lot to do.” He agreed with the Second Chamber that sending the Island Council, the elected representatives of the people, home was a far-reaching measure.

Holding the Island Council elections in 2019 as originally planned would not be feasible, said Knops, who anticipated that two years would be the minimum time needed to restore the situation. Sufficient stability, a correct political attitude and a decently functioning administration would have to be in place before authority can be returned to the local government, he added.

Speedy improvements will be made to the island’s physical infrastructure for which budget was available, including the 47 million euros for the recovery efforts after the hurricanes. He agreed with the Second Chamber that communication with the people and creating support was important. He said this was one of the reasons he would be going to St. Eustatius later this week to talk with the people.

Knops said that naturally there would be people who would say that this was a Dutch coup and colonialist behaviour. “But it is our task to make things better for the people.” He assured the Parliament that measures had been taken to ensure the safety of the local people and those visiting from abroad. He did not divulge specifics in the interest of security.

Discussing the right pf self-determination would always remain possible, said Knops. “The local government is striving for more autonomy, which I respect,” he said, adding that he acknowledged the right of self-determination. He said that (more) autonomy could be discussed, but that this increased autonomy had to take place in an orderly way. “Getting out of the Kingdom is not up to me, but to the people.”

He promised to work more at his coordinative task, one of the aspects mentioned in the Committee’s report. He announced the establishing of a Caribbean Netherlands Steering Group, headed by Kingdom Relations Acting Director Henk Brons. This should improve coordination of the responsibilities and actions of the individual ministries in The Hague.

Knops confirmed that the Dutch Government indeed had fallen short since the dismantling of the country Netherlands Antilles. “If this situation had evolved in a Dutch municipality, we would have intervened long-time. We didn’t in St. Eustatius and that is partly due to the stand of the Netherlands. We were too reserved, we partly looked away and sometimes didn’t give enough attention.”

St. Eustatius has a lot of potential, he concluded. There is a lot of history, archaeological valuables, beautiful nature and more possibilities for eco-tourism. “But right now it is a bit of a mess with car wrecks everywhere.”