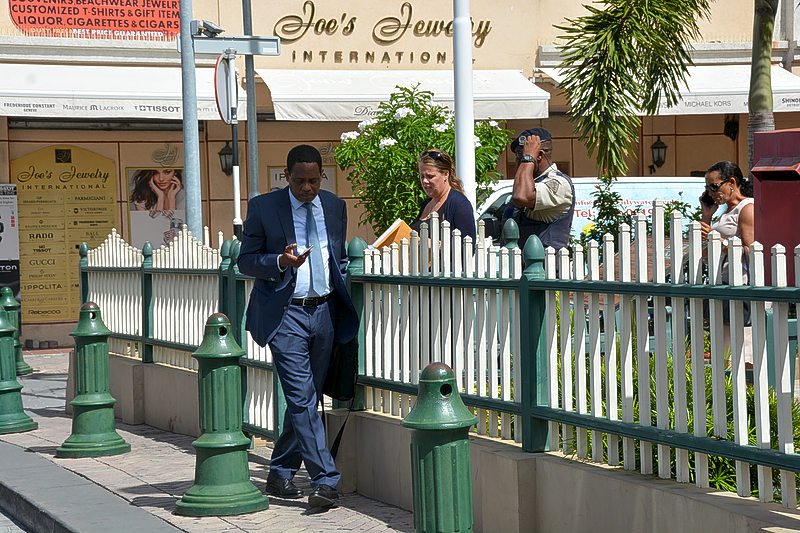 PHILIPSBURG–Director of Immigration Udo Aron on Wednesday morning contested his suspension by the Minister of Justice from June 22 at the Court of First Instance.

Aron was suspended for involvement in a possible case of human smuggling in which he reportedly allowed entry to a woman from the Dominican Republic, who had no visa for St. Maarten.

Aron was suspended from his job on June 22. The investigation started one month earlier. He is suspected of human smuggling committed on May 5.

That day, Aron arrived at Princess Juliana International Airport SXM in the company of a woman from the Dominican Republic. He walked past Immigration Officers, informing them that he had the situation under control. Immigration officers did not comply with Aron’s statement and told him to follow correct procedures. After consultation with the Acting Head, Aron passed Immigration with the woman.

Aron is suspended pending the outcome of the investigation, and has in the meantime been served with a letter of dismissal.

Visas for St. Maarten and other countries within the Kingdom are only to be issued by Dutch embassies and consulates worldwide. “In order to guarantee proper governance, however, it is common practice within IBP to decide on visa requests on a national level in the form of a ‘decision to allow entry,’ which could be seen as a visa waiver,” Aron’s lawyer Hedy Kockx claimed.

According to Aron, he was entitled to issue such “decisions to allow entry.” Visa waivers of this nature, for example, are handed out to foreigners involved in shipping, for transit of passengers from the airport to ferry docks to Anguilla and St. Barths and vice versa, for humanitarian reasons, or to extend touristic visits, the lawyer explained.

The Minister of Justice may not have been aware of the procedure, as he has only been in office since January 26, Kockx said, claiming that the Minister “had no sense of Immigration affairs.”

Aron’s lawyer further claimed the visa waivers were to avoid problems with the so called 2×24 and 1×24 stamps given to transit passengers at the airport. As the airport does not have a transit hall tourists are given a 24-hour or 48-hour stamp in their passport to allow them to stay in St. Maarten to take a flight the next day.

Kockx said that illegal immigrants often took this route to fly in transit into St. Maarten, obtain a stamp by Immigration and enter the country to stay here illegally or to be shipped to another island by human smugglers.

The lawyer refuted claims that her client had abused his power and had taken the woman in question into his own home and had provided her with a guarantee letter.

She claimed her client had not been properly heard and that his reputation has been slandered based on rumours, whereas the investigations have barely started. Three months after the incident her client has still not been heard by detectives, Kockx said.

The Ministry of Justice denies that the IBP Director was entitled to issue visa waivers, or any “ad-hoc decision” concerning foreigners, as these are Kingdom matters. “Aron overstepped his authority and did not comply with the mandate given to him by the Minister of Justice,” attorney-at-law Richard Gibson Jr. said.

He said Minister Kirindongo had only been aware of the existence of the “decisions to allow entry” in May, and that the stamps had been taken out of circulation without the Ministry’s knowledge.

Gibson said the case had led to a criminal investigation which harmed the people’s trust in the Ministry.

Aron, who has been a civil servant since 2004, except for a one-year stint with funding agency USONA, became IBP Director in November 2015. The Court will give its decision September 7.