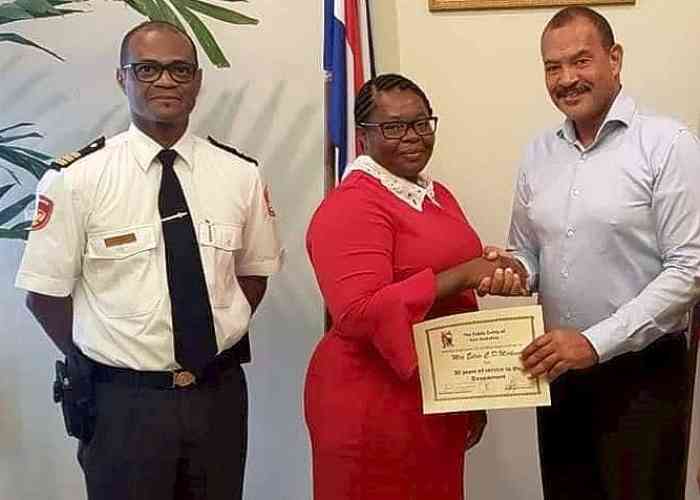 ST. EUSTATIUS–Disaster Coordinator Edris Merkman-Bennett was recognized by the island government of St. Eustatius for thirty years of service. Government Commissioner Marcolino “Mike” Franco presented her with a token of gratitude.

Merkman-Bennett first started working in service of the island government on July 1, 1988, as secretary to the then Lt. Governor George Sleeswijk and the Executive Council. From 1990 to 1994 she worked at the Department of Internal Affairs. Between April 1994 and 1999 she was a Commissioner and Island Council Member for the Democratic Party (DP) together with colleague Commissioner Julian Woodley. She then returned to Internal Affairs for one year and went on to serve as second Acting Island Secretary until 2005.

From 2006 to 2012, Merkman-Bennett served as Acting Island Secretary to the Executive- and Island Councils. She has been the Disaster Office coordinator since 2013.

“I work for Statia, my island, my paradise. There have been a lot of ups and downs over the years. In the 1990s civil servants had to make huge financial sacrifices and give up 10 per cent of their salaries just to keep their jobs, but we did this for our island. It was not easy, but if I have to do it again I would do it again,” she said.

“I’m truly grateful to all the successive governments and administration that I have had the privilege to work with. I have learned over the years that the word ‘team’ means: together everyone achieves more. I practice this in my work every day,” Merkman-Bennett said in extending her thanks to all civil servants and the government for affording her this opportunity.

Merkman-Bennett is the eldest daughter and fourth child of Ruford and Eunice Merkman. She is married to Fire Chief Andre Bennett and mother of three daughters and an adopted son.

She has served the board of Seventh-Day Adventist School for 15 years and has served the church’s community services department’s soup kitchen and other charities.