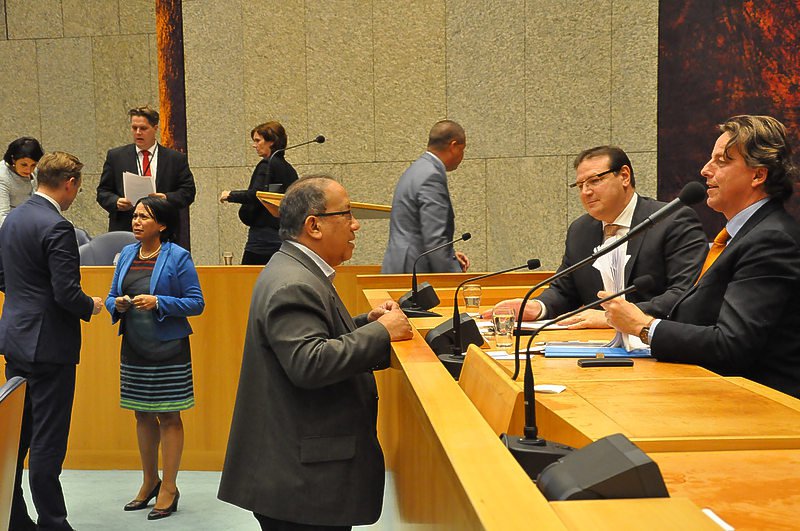 THE HAGUE–The Dutch Caribbean countries and the Netherlands have fundamentally different views on the constitutional basis on which the Kingdom Visa Law should be implemented and the handling of said law proposal in the Second Chamber of the Dutch Parliament on Thursday didn’t bring the parties any closer.

The Dutch Government is of the opinion that the visa policy for the Dutch Caribbean countries is a Kingdom affair and bases the law proposal on article 3 of the Kingdom Charter, which states that foreign affairs and the setting of general conditions for the admittance and expulsion of foreigners by definition is a Kingdom affair. The Council of State of the Kingdom has also advised the use of this article.

The Dutch Caribbean countries, on the other hand, maintain that the issuing of visas is an autonomous affair of the countries and would rather see that the Kingdom Visa Law, which has been a source of discussion of the partners in the Kingdom for several years, is based on a regulation of mutual cooperation stated in article 38 of the Charter.

Member of the Aruba Parliament Rene Herdé of the AVP party stated that the current law proposal, which is based on article 3, is in violation with the Charter. “The law in question is a good instrument to regulate and a degree of uniformity is also good, but the Charter states that the issuing of visa is a national affair,” he said.

Aruba Minister Plenipotentiary Alfonso Boekhoudt, who made use of his right to speak as it concerns a Kingdom Law proposal, said that the law proposal in question didn’t leave the countries room to implement their visa policy through national legislation. In his opinion, the law should also be based on article 38 of the Charter. He submitted an amendment to arrange this.

Saying that he believed in “hybrid solutions,” Member of the Aruba Parliament Andin Bikker of the PDR party submitted two amendments, which were co-signed by the delegates of the Parliaments of Aruba, Curaçao and St. Maarten present during Thursday’s handling.

Bikker’s first amendment sought to establish a form of mediation within the Kingdom Visa Law in case of differences between the countries. “If this law is implemented, we need a format to settle possible disputes,” he said.

Member of the Second Chamber Roelof van Laar of the Labour Party PvdA didn’t see the need to build in a separate mediation clause for disputes about the issuing of visas in the Kingdom Visa Law. “Naturally parties can resort to mediation when they have a dispute. That doesn’t have to be anchored by law,” he said. Bikker compared it to fire insurance: “You must have it, but you hope you will never have to make use of it.”

Bikker’s second amendment proposed to incorporate the possibility of filing requests for a visa electronically, which would simplify and shorten the procedure for foreigners to apply for a visa when they wanted to visit one of the Dutch Caribbean countries. He said that other countries, such as the United States, the United Kingdom and Australia also had such an electronic system for visa applications.

The suggestion of applying for a visa electronically received support from Dutch Minister of Foreign Affairs Bert Koenders. “This request fits in the digitalisation of the visa process that the Ministry of Foreign Affairs is currently working on for the application of a (European) Schengen visa as well as Caribbean visa.”

Koenders announced that the electronic application for a Dutch Caribbean visa was expected to be ready in 2017. He said that including the electronic application in the Kingdom Visa Law was not a necessity as such, but he added that he didn’t have any objections either. “The Dutch Government will gladly take over the amendment in question,” he said.

The Minister did advise against Bikker’s amendment to secure a mediation format in the law. He explained that regular visa consultation between the Foreign Affairs Minister and the authorities of the countries was already in place and that in case of a dispute, the countries could turn to the Kingdom Council of Ministers. He also reminded the special delegates that a Dispute Regulation was in the making where issues regarding visa could be handled.

Koenders elucidated that the Kingdom Visa Law, which sets the parameters for the visa policy in Aruba, Curaçao and St. Maarten, didn’t entail major changes. He remarked that the issuing of visa would remain a national affair of the Dutch Caribbean countries and that the countries also decided on the duration of visa.

According to Koenders, the Kingdom Visa Law offers “clarity” on the division of authority. The law specifically offers room for the Dutch Caribbean countries to add their own national legislation that would regulate the use of criteria such as public order, national security, public health and having sufficient means to support oneself. “These are exactly the matters that are important for the countries.”

The Minister further noted that the point of departure of the law was that foreigners require a visa, unless they were exempted by a ministerial decision. The establishing of the exemption rule is a joint responsibility of the Minister of Foreign Affairs and the authorities of the countries,” Koenders said.

The handling of the Kingdom Visa Law turned into a fierce discussion when Member of the Second Chamber Han ten Broeke of the liberal democratic VVD party brought up the problem with illegal immigration of Venezuelans into Aruba, reinforcing the view of the VVD that solid security at the Kingdom borders was in the interest of the Kingdom.

Ten Broeke painted a picture of mass migration from the South American country and the lack of action by Aruban authorities to curb this potential hazard. He pointed out that Venezuela was not on the list of countries that require a visa to enter the Dutch Caribbean and asked when this would be revised.

“Venezuela is on the verge of a collapse. The situation is quickly becoming unbearable for the people and it is posing a threat to the region. Venezuela is the North Korea of South America. Crossing over to Aruba is easy and there is already an increase in the number of illegal Venezuelans. This is the Achilles heel of the Kingdom,” said Ten Broeke. He mentioned the 30 million inhabitants of Venezuela and the Aruba population of some 100,000 to underscore the potential risks.

Members of the Aruba Parliament Herdé and Bikker vehemently objected to Ten Broeke’s remarks, especially to his accusation that the Aruba Government doesn’t have a policy or measures in place to deal with an (illegal) influx from Venezuela.

Herdé countered that Aruba did have an immigration policy, that it has a system of registering who entered the country, that there were increased patrols along the coast and that illegal persons were removed from the island. “You paint an incorrect picture. You don’t know the actual situation,” he told Ten Broeke, whom he invited to come to Aruba to see things for himself.

The Arubans received support from Member Roelof van Laar, who pointed out that a visa policy for Venezuelans wouldn’t keep them from illegally coming to Aruba by boat. Ten Broeke admitted that a uniform visa policy in the Kingdom would not keep illegal immigrants out. “But if we do nothing, you will end up empty-handed when they come.”

Van Laar protested against Ten Broeke’s motion which called on the Governments of Aruba and Curaçao to have an active registration of foreigners, to strictly screen Venezuelans and to have a restrictive policy for people from this South American country. “The situation that you describe is not correct. We who have been on the islands know that,” said Van Laar.

Koenders also advised against Ten Broeke’s motion. Ten Broeke promised to rewrite his motion. Voting on the amendments and the law proposal takes place next Tuesday.