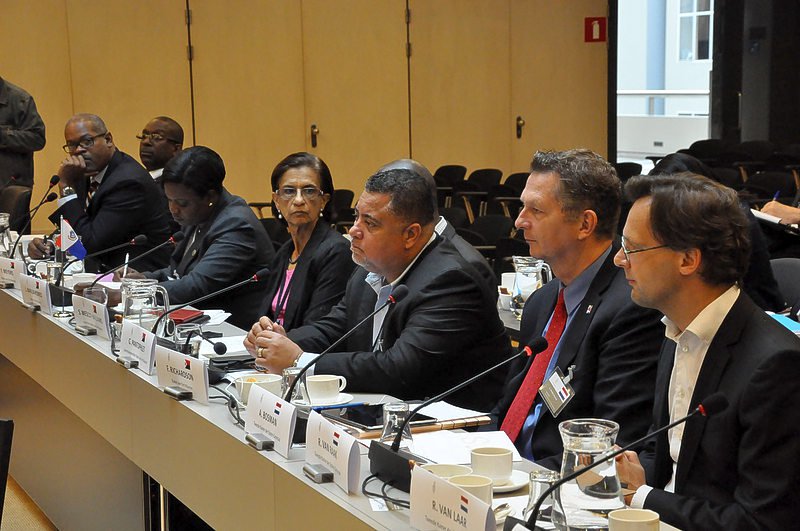 THE HAGUE–Deliberations of the four Parliaments on Thursday to arrive at a common proposition for the Kingdom Law to establish a Dispute Regulation (“geschillenregeling”) for the Kingdom didn’t yield concrete results, other than the fact that parties decided to further explore the options, with the possibility of appointing the Council of State as the body to handle disputes.

Much to the chagrin of the Dutch Caribbean Parliamentary delegations, the Dutch delegation didn’t feel compelled to indicate during the Inter-Parliamentary Consultation for the Kingdom IPKO where it stood on the two law proposals that are now on the table for a Dispute Regulation ahead of the actual handling in the Second and First Chambers.

Establishing a position of the IPKO at this point was important, said Chairperson of the St. Maarten Parliament Sarah Wescot-Williams of the Democratic Party (DP). “We should not depart as IPKO without a position. We won’t get any further if we don’t adopt a position and await the procedure of handling the proposals and just await which of the two it will be,” she said.

IPKO’s Vice-chairman Senator Ruard Ganzevoort of the green left party GroenLinks said the Dutch Caribbean delegations “asked too much” if they wanted the Dutch delegation to assume a position. “We cannot give a commitment as to which law proposal we support,” he said. He emphasized that the IPKO was of a consultative nature and that the decision-taking was the task of the individual Parliaments.

Member of the Second Chamber André Bosman of the liberal democratic VVD party said that the matter still had to be discussed within his party. “I will not make a definite statement on this.” He made clear that the Dispute Regulation could never overrule the guarantee function in the Kingdom Charter and the associated responsibility of the Kingdom Government.

The island delegations had at least hoped to attain the acknowledgement of the Dutch delegation that at least the proposal that they drafted as Parliaments of Aruba, Curaçao and St. Maarten complied with the three points of departure that the IPKO had set, namely the independent and binding aspect of the Dispute Regulation, as well as the strictly legal range that this regulation would cover. The draft law compiled by the Dutch Caribbean countries proposes to establish a special independent court to render a binding ruling on disputes.

The law proposal that Dutch Minister of Home Affairs and Kingdom Relations Ronald Plasterk has submitted for handling by the Second Chamber of the Dutch Parliament doesn’t take the points of departure that the IPKO established in May 2015 and reconfirmed in St. Maarten in January this year. It also proposes to appoint the Council of State as the body to give advice disputes.

Member of the Curaçao Parliament Elmer Wilsoe of the Pueblo Soberano party said that by submitting a law proposal against the wishes of the IPKO, Minister Plasterk has shown “enormous contempt” for the Parliaments.

Wilsoe read an adopted October 2015 motion of Member of the Second Chamber Roelof van Laar of the Labour Party PvdA to reinforce his standpoint. The motion requested the Dutch Government to take the points of departure set by the IPKO as guidance to arrive at a Dispute Regulation.

Van Laar made clear that it made no sense for the parties to get stuck on their viewpoints as this would not yield any progress in the issue of establishing an independent Dispute Regulation. “We need to move towards each other.” He accused the Dutch Caribbean delegations of having insufficiently communicated about their law proposal. “You didn’t call, you didn’t consult.”

“We have to find a solution for both aspects, the strictly legal aspect and the policy part,” said Member of the Aruba Parliament Rene Herdé of the AVP party. “It is important to create space to come closer to each other. I see this as a practical execution while at the same time giving content to the points of departure that we as IPKO had agreed upon.”

Sarah Wescot-Williams said the St. Maarten delegation was “open” to further look into this option, but that it wanted to further deliberate this matter in the St. Maarten Parliament. She said that reaching the end goal was important, namely to establish a Dispute Regulation. “And, if this bring us closer to that goal, we will go down that road.”

The Curaçao delegation was careful in sharing its view on the Aruba proposal. “Curaçao is in favour of submitting our law proposal, leaving room for amendments,” said Elmer Wilsoe, who like St. Maarten indicated that it would first have to discuss the new proposal with the Curaçao Parliament.

Today, Friday, the delegations will further deliberate on the Aruba proposal before coming to a decision on the so-called agreements list which will be signed in the presence of the media.