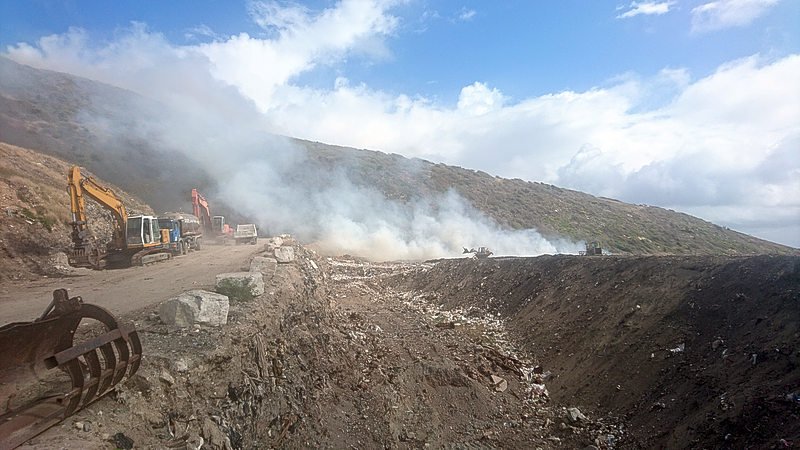 MARIGOT–A recent fire at the eco-landfill in Grande Cayes caused by expired distress flares hidden in household garbage bags has highlighted the still unresolved situation of collecting and disposing of distress flares, not to mention the risk of injury or worse when they explode.

An employee at the landfill was injured after inhaling the orange smoke of an exploding flare which caused vomiting, serious eye irritation and breathing difficulties, Patrick Villemin, President of Verde-SXM, the company that manages the site, disclosed.

The fire was contained and extinguished by the site’s manager Jean-Pierre Tey and a few employees by using heavy equipment to cover the fire with earth. Tey said some 15 distress flares in garbage bags had exploded, aided by an increase of temperature from the heat of the sun.

Villemin said he had no authority to be telling marinas or boat owners how to dispose of flares but nevertheless was considering filing a complaint due to the dangers his employees were subjected to. Despite the landfill priding itself on its sorting methods, the flares were in bags of household waste stored in a “non-dangerous” section of the site.

“It is not until the waste comes to be processed that the danger comes to light,” he said.

Michael Wery, the Maritime Affairs representative on the French side, when questioned, said the Préfecture is responsible for collecting and disposing of the flares, not his department.

Chef de Cabinet at the Préfecture, Emmanuel Effantin said to his knowledge marinas do have small containers where they can dispose of their expired flares, though he was not sure if all marinas had these containers.

“The objective is to fill a container of expired flares and ship them to France where they get treated and recycled,” he told The Daily Herald. “The problem is that this is extremely expensive and complicated. The bomb disposal experts who used to come here from Guadeloupe to dispose of them are no longer allowed to come here since the environmental laws changed a few years ago. But we are trying to see with Préfète Anne Laubies if we can get them to come back. It’s expensive too, but not as expensive as sending a container to France. We are trying to find a solution.”

The situation over disposing of expired distress flares was first brought to light by the Maritime School of the West Indies (MSWI)a few weeks ago when it complained there was nowhere on both sides of the island for mariners to dispose of their expired flares, with the result they get deposited in random locations, or in waste bins.

Jean-Pierre Tey warned that if the problem is not resolved soon, a serious accident such as garbage truck exploding could occur.

The problem could already be solved, partly, on confirmation that the Collectivité has purchased a 200 litre capacity container for storage of expired flares. Details of this container were not disclosed by the department of Risk Management, whether it is already in use or where it is located. It did say, however, it is working closely with the Préfecture on the matter of distress flares and their disposal.