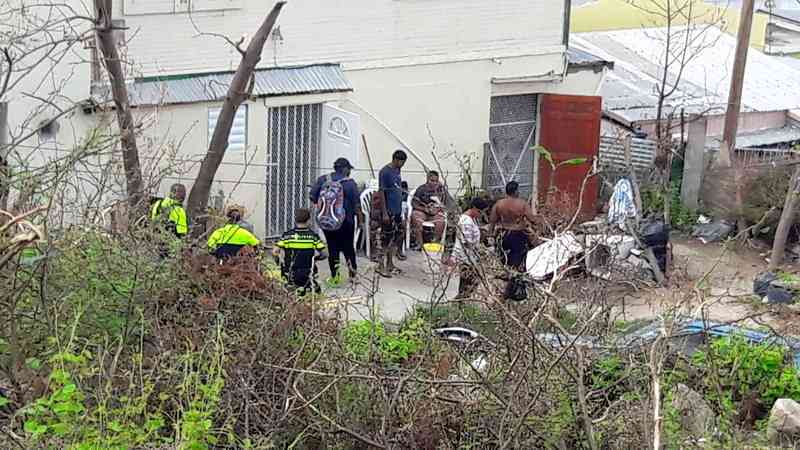 PHILIPSBURG–A 24-year-old man with evident psychological and psychiatric problems was sentenced at the Court of First Instance to eight years’ imprisonment for the fatal stabbing of victim R.J. “Reggy” Arrindell in the Over the Bank area on September 17, 2017.

The Prosecutor leading the “Bayonet” investigation demanded a prison sentence of 12 years for suspect Lemar A. Rogers. Following the questioning of several witnesses and forensic investigations, the Prosecutor said it had been clearly proven that Roger was responsible for the victim’s death.
The Prosecutor did not consider murder proven, but called for a conviction of manslaughter.
The defendant confessed to the crime and said the stabbing was the result of a long-running conflict about, amongst other things, noise pollution and the payment of rent. The victim rented a home from the suspect’s mother in Over the Bank.
The victim was “butchered” the Prosecutor said. After the door to his apartment was forced open with a crowbar, the victim was viciously attacked with a knife.
The victim sustained no fewer than 21 stab wounds to his upper body and head. He also received 11 stabs to his hands, which he used to ward off the attack. The victim’s neck and throat were also cut, the Prosecutor said.
The victim was left bleeding to death on the floor of his apartment, but Rogers returned to the scene of the crime after he learned he was injured. He returned with a tree branch, with which he further mutilated his victim’s head.
Rogers did not leave the apartment for a second time, but waited for the police to arrive on the scene of the crime, where he was arrested.
The Prosecutor said the suspect had been looking for a confrontation and had led himself into a situation which had escalated terribly. “The victim has been brutally killed,” he said.
“The psychological and psychiatric examinations conducted on the suspect indicate a personality disorder, psychosis and possibly also megalomania. This means that the defendant should undergo mental treatment in the best interest of the community, but also in the interest of himself,” the Prosecutor said in his demand.
Such treatment, however, is not possible on St. Maarten because such a (forensic) clinic is not available. “This is why the protection of others in the community from the defendant is of high priority. For that reason, I requested such a high prison sentence. It is important for the government of St. Maarten to invest in a solution in the absence of a mental clinic, so that perpetrators with a disorder can be treated and the society of St. Maarten can be better protected. There have been too many similar stabbing incidents on the island,” the Prosecutor said.
The investigating psychiatrist and psychologist both mentioned the defendant has quite a few mental problems.
In 2013 he was sentenced by the Court in Guadeloupe for mistreatment of a Chinese women in French St. Maarten. Both experts considered the suspect less accountable for his acts.
Attorney Geert Hatzmann fully agreed with the Prosecutor in his call for a psychiatric prison on the island. As to the crime, the lawyer stated his client, whom he considered more of a patient than a criminal, had snapped and had committed manslaughter while angrily cutting away at his victim. The lawyer considered a two-year sentence to be sufficient punishment as he considered his client’s accountability to be strongly reduced.
The Court acquitted the defendant of murder due to his state of mind. The Judge, however, found the “horrible” manslaughter legally and convincingly proven. Due to the defendant’s lesser accountability for mental health reasons, Rogers was sentenced to eight years.
The Judge said it was “high time” for a forensic mental institution to be established in St. Maarten. “I hope this message will arrive at the Parliament next door,” he Judge said.