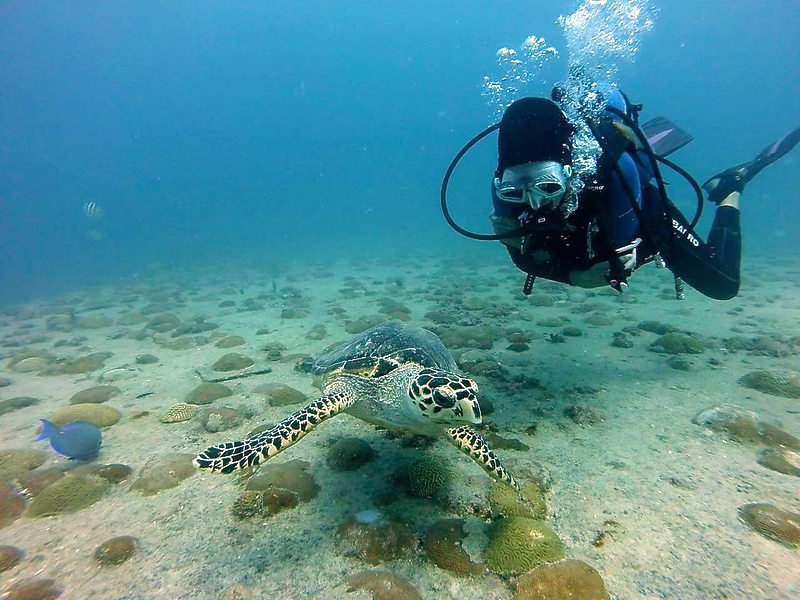 COLE BAY– Despite reef and coral damage from Hurricane Irma, the country’s dive sites are still great for scuba diving because of the marine life and surroundings. Nature Foundation said Wednesday it “still highly recommends” the country as a dive destination and encourages visitors to return to scuba dive.

Three dive boats survived Irma. The Foundation encourages dive schools to start operation as soon as possible.
Irma has severely impacted several dive sites in the Man of War Shoal Marine Park and around the country. Large coral and sponge die-offs were recorded by a recent Nature Foundation assessment, especially in the lower parts of the reefs.
Shallower dive sites experienced direct major damage to branching corals such as Elkhorn coral (Acropora palmata). Large coral fragments have been broken off. The large and branching growth form of Elkhorn corals makes them vulnerable to strong water motions and surge.
Major indirect impacts are found on the reef and to corals due to sediment and sand cover. The strong surge and water motion of Hurricane Irma caused sand and sediment to move over the reef and cover mainly deeper sections and mainly coral and sponges show large die-offs.
Rapid assessments by Nature Foundation have estimated a 30 per cent die-off of the reef due to sediment cover and a total of 50 per cent of the reef being affected by Irma generally. Especially in the Man of War Shoal Marine Park, turf algae and macro algae have been ripped off the reef due to the strong surge underwater. Turf algae are the main food source for several reef fish and the disappearance could impact fish stock negatively.
Seagrass beds have decreased drastically, probably ripped off by the strong current or covered by sediment. This could be a potential problem for sea turtles and other marine life that depend on it as a food source, said the Foundation.
The invasive midrib seagrass (Halophila stipulacea) has mainly disappeared. Native seagrass species survived the storm more often, such as turtle grass (Thalassia testudinum) and manatee grass (Syringodium filiforme), probably due to their larger growth form and strong roots.
Fortunately, several marine species were found in good health on the reefs, including sharks, stingrays, sea turtles, reef fish, octopus and morays. Nature Foundation said it was “very pleased” to have recorded quite a lot of sea turtles surviving the hurricane.
Interesting is the occurrence of sharks on the reefs. Three weeks after the storm no sharks were recorded, but four weeks after the storm sharks were back to normal abundance. This shows that sharks most likely sought hurricane shelter in the deeper waters and returned to their normal habitat afterward, the Foundation said.