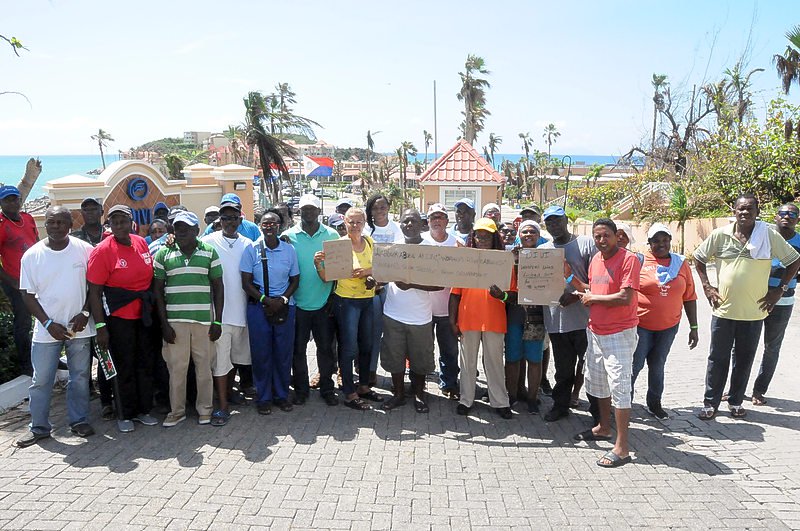 LITTLE BAY–A group of upset Divi Little Bay Beach Resort workers stood in protest at the entrance of the resort on Thursday to contest management’s move to reduce their work days and consequently their pay.

The workers also claimed that they were unceremoniously told to leave the property, if they were not willing to work the reduced days offered.
In an invited comment Divi’s Acting General Manager Thijs Scheepers said there is work for everyone and the workers will be able to resume their tasks on Monday. “We have permanent and contracted workers and for us everyone is important and we want to ensure that everyone is taken care of,” Scheepers assured.
The company reduced the work week of its staffers from six to three days. The workers said they toiled arduously over the past weeks to clean the property following the destruction caused by Hurricanes Irma and Maria and as soon as they completed the cleaning, management sprung the reduced work week on them and sent them home on Thursday after they worked the three days offered earlier this week.
They said also that management offered them food during the time they showed up to clean only to deduct the food allowance from their salary. The workers said they did not have a choice and indicated that if the company’s intention was to deduct the meal allowance from their salaries, this should have been made clear to them from the inception.
“We still have rent to pay and we still have children to feed,” one worker told The Daily Herald on the scene. She said the workers had been paid US $200 for two weeks of doing hard labour for construction-related work to clean up the property after the hurricanes. “It is because of us the workers that Divi is looking so clean today,” said another worker.
Another said the manager was treating them like they were not humans and was addressing them in a condescending manner.
During the protest action, the personnel stood in the hot sun outside the property talking amongst themselves. Some were openly discussing their grievances and what they felt had been management’s unfairness. At least two workers held up posters expressing their frustrations. “It’s not the work, it’s the pay that we don’t like,” read one placard. “Labour abuse at Divi. Workers’ rights abused. Workers seek justice from government,” read another.
After standing outside for a long while, Workers Institute for Organised Labour (WIFOL) President Theophilus Thompson arrived and addressed the workers briefly before leaving with some of the company’s shop stewards for a meeting with Scheepers.
Thompson told this newspaper Thursday evening that the union made it clear to management that their decision to send home employees and give them a shorter work week than what is stipulated in the Collective Labour Agreement (CLA) was in violation of the country’s labour laws and the CLA. Thompson said the local manager said reducing the work week was instructions given to him from Divi’s head office. “We emphasized the fact that this is an illegal decision and action taken by management and that they should rectify the employees’ salary accordingly.”
The union president said slashing the work week in half is not something that the union will accept. The CLA has provisions for an amendment to the work week, if occupancy falls below a certain level that it will affect the income of the resort. He said, however, that this can only be done via negotiations and not solely as a decision from the company.
WIFOL is only willing to have the work week reduced by one day – so from six to five days. Any amendments to the CLA has to be done via negotiations, Thompson stressed. “The local manager agreed with our position and said he will inform the head office and they will get back to us. So we are still in discussion on the matter, but there is no way that we can allow the company to make a decision on their own which can affect the workers and which is contrary to the CLA.”
Thompson said many companies have business interruption insurance, which includes loss of income and payment of wages, but he insisted that they are refusing to present the insurance for the union to review. “And we have a right to see that. We have a right to see the coverage and they are refusing to show that they have this coverage and the details of the coverage. As long as it has to do with the employees, the union has a right to get a copy and to see what the implications are.” The union asked to see Divi’s insurance policy, and the union is awaiting an answer. The union was told that the head office has the policy in its possession.
Regarding Thursday’s action, Thompson said since the work week was reduced to three days, the workers should not have been on the job on Thursday, but he stressed that this does not mean that they will not get paid for the days. “The workers have a guaranteed six-day work week that they must be paid for, but if the employer decides to have them work for three or four days, that is his right, but he has to pay them for six days. If he doesn’t want to pay them there is provision in the CLA that we can negotiate for a reduction in the work week.”
“One day – that’s the norm – after all, the workers have expenses too, but we understand the situation and so every resort that we have a CLA with, that is how it is. The CLA is an agreement that they agreed to. We were in negotiations, sometimes for months, and they signed to it so don’t come now and say that you want to do something contrary to the CLA and if you do, then we will take other industrial action,” he threatened.

Divi trying its ‘best’
In the meantime, Scheepers said the company still has work for everyone. “They (the workers) will be coming back to work again on Monday. As far as hours and salary, that’s something that we are dealing here with internally so I am not going to comment on this,” he said.
The Acting General Manager said he knows the situation is very hard for staffers, noting “we are trying our best with what we have.”
Divi had a total of about 183 workers prior to Hurricane Irma and the company now has between 160 to 170 workers. “And we are still paying them,” he said.