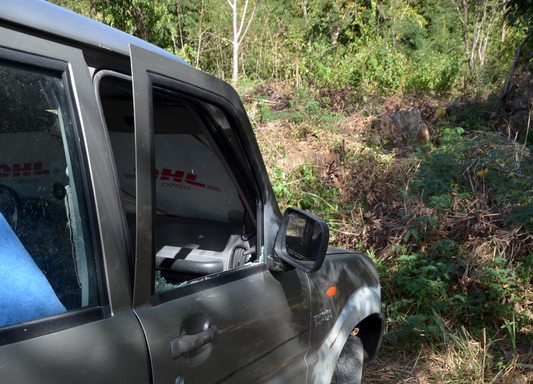 BELAIR–Medical Practitioner and concerned citizen Dr. Frits Bus on Thursday expressed grave concern about the rising crime situation in the country after his vehicle along with four others in the Belair area were broken into and parts stolen on Tuesday evening and several of his initial calls to the emergency 911 number went unanswered.

Bus called on government to hastily do something to curb the crime situation, saying that he is cognizant that the police force is working under challenges such as lack of sufficient manpower and tools.

Bus told The Daily Herald that in his case, the car burglars smashed the passenger side window of his pickup truck and removed his CD player, stereo, battery and some personal items. His pickup was at the time parked under a well-lit street light opposite his home and had an alarm in it, which did not go off.

Primarily batteries were stolen from the other vehicles. He speculated that the breaking into the vehicles in the area must have been an organised activity given the number of vehicles broken into on that night. “It is very bold to go to so many cars,” he said.

Bus, who is also President of the Belair Hillside Foundation, said the area has a camera surveillance system, but he did not yet have a chance to look at the video from Tuesday night.

“I am getting very worried about the crime situation in St. Maarten and it seems as if the police are unable, for whatever reason, to focus on matters such as [petty crime – Ed.] but in the meantime the thieves can do whatever they want because no one is getting caught,” Bus said. “I understand that there are murderers and killers that they have to go after, but you can’t run a society like this. I am worried about this.”

Bus said when he realised that his vehicle had been broken into and he called the police station around 8:00am on Wednesday, it was only after the third call that someone finally picked up. He was then told to call the 911 emergency number.

Although he explained that it wasn’t an emergency as the car burglars had already left, he was told that it was an emergency and a mater for 911 to handle. Bus said he then called 911 several times and the phone went unanswered. He said it took him about 15 minutes to finally get someone on the phone who said a patrol would be sent to his home.

“Where are we living? Are we living in a third world country? 911 should be immediately picked up because if there is a burglar in your house, you want to be able to call 911 and have someone answer immediately,” he said. “It took me 15 minutes before I got a police officer who said he will send a patrol to my house. We cannot function like this.”

Bus said when his motorbike had been stolen last year and he called 911, no one answered period. He then went down to the police station and complained that 911 calls were not being answered and he was shown phone lines “hanging from the ceiling and not functioning.”

Bus said the issues plaguing the Police Force are “not problems for the police, but one for government. Instead of spending US $80,000 on Christmas decorations that no one sees, it should go towards crime fighting,” he argued.

Bus said he wanted his comments to be viewed as positive criticism so that something can be done about the crime situation in the country. “The entire idea of this article is that it catches someone’s attention so that something happens about it,” he noted.

September 23, 2022
1
Lawyer Cor Merx and his assistant (left) with Mark Mingo (center) on Friday, after the announcement of the multi-million dollar claim for damages in the Emerald casePHILIPSBURG—Seven prosecutors in the Emerald investigation into fraud in Port St. Maarten have...
Read more