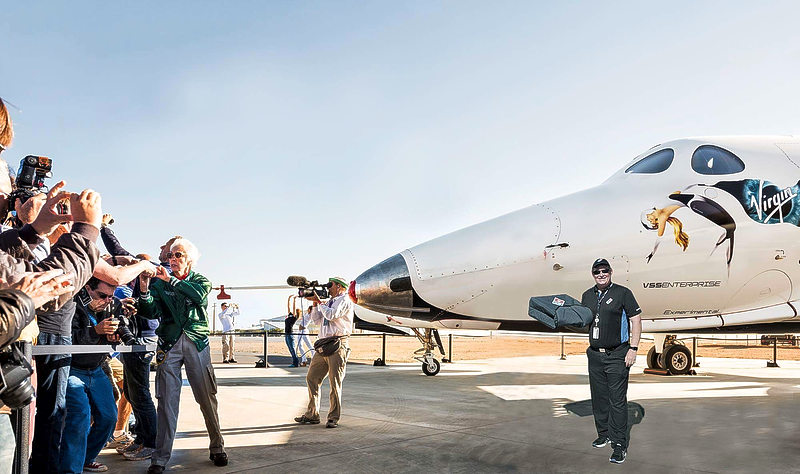 John Caputo of Domino’s St. Maarten poses with a pizza in front of a Virgin Galactic spacecraft in an undated publicity photo.

PHILIPSBURG–Domino’s St. Maarten will again add the island to the history books as well as the Guinness Book of World Records when it becomes the first to deliver pizzas to the International Space Station orbiting in outer space, thanks to a partnership with Virgin Galactic, the space tourism arm of Sir Richard Branson’s Virgin Group of Companies.

The choice of pizzas from St. Maarten to be delivered by franchise partners John Caputo and Gijs Frederiks was born out of Branson’s very creative imagination. The business partners are to start training soon for their space debut in February 2018.

St. Maarten residents will help decide which favourite pizza combination will be delivered to the astronauts living on the space station. Suggestions should be made on Domino’s St. Maarten’s Facebook Page #delivermetospace or go in to any Domino’s location to submit your combination. The first 11 customers (in honour of SXM Day being 11/11) will have a chance of joining the team with an all-expense paid trip to Cape Canaveral next February.

The race to space all started late last year when Branson was on the island for a nature convention and a meeting with Port St. Maarten. The avid aviation mogul was heading back to Necker Island, his private isle in the British Virgin Islands, via Windward Islands Airways International Winair when he was seated next to a stack of Domino’s Pizza, hot and ready for delivery.

“This captivated his imagination and when he saw my quote about ‘The Power of Possible and pushing its limits’ in the in-flight magazine showcasing the world record delivery stunt we recently did, after that the dawn of pizza delivery to space was born,” said Caputo.

Branson was so impressed with the viral possibilities for Virgin of pizza in space that he immediately contacted Domino’s St. Maarten.

“The first thing he said to me was, ‘If you can somehow manage to have delivered pizzas from one location to eight island/countries all in less than 46 minutes, you lads could just about do anything. How about delivering to where no one has delivered before? – Space!’ I about dropped the phone, but quickly had visions of what could be possible and immediately said, ‘We are in,’” Caputo said.

Astronauts have baked pizza in space previously, but have never had one delivered to them.

Domino’s Corporate quickly hopped on board in support of this sound-barrier breaking project and is working on special pizza packaging that will ensure that the pizza will not rise to the top of the box due to zero gravity, and will update the company’s “Pizza Tracker” on its websites around the world to include updates, live streaming and alerts for every step of this momentous delivery.

As the first priority is safety – safety of the passengers, safety of the crew and safety of their vehicles – both Caputo and Frederiks will take part in several weeks of pre-flight preparation, bonding with the crew and training onsite at Spaceport America, the world’s first purpose-built commercial spaceport. Learning how to make the most of time spent in microgravity as well as tips on how to be the most comfortable in macro-gravity will form an important part of the preparation.

Pre-flight preparation will ensure that both are mentally and physically prepared to savour every second of the spaceflight pizza delivery. “They chose two of us in case one was physically or mentally unable to go,” said Caputo.

Both franchise partners are already booked to appear on Late Night with Jimmy Fallon just days after their space flight.

“This will certainly lead to an amazing amount of media coverage for Domino’s and St. Maarten,” said Frederiks. “John and I just wish we were headed to the moon, so we could plant a St. Maarten flag there, but the delivery is scheduled to go to the astronauts on board the International Space Station on February 9, 2018, National Pizza Day.”