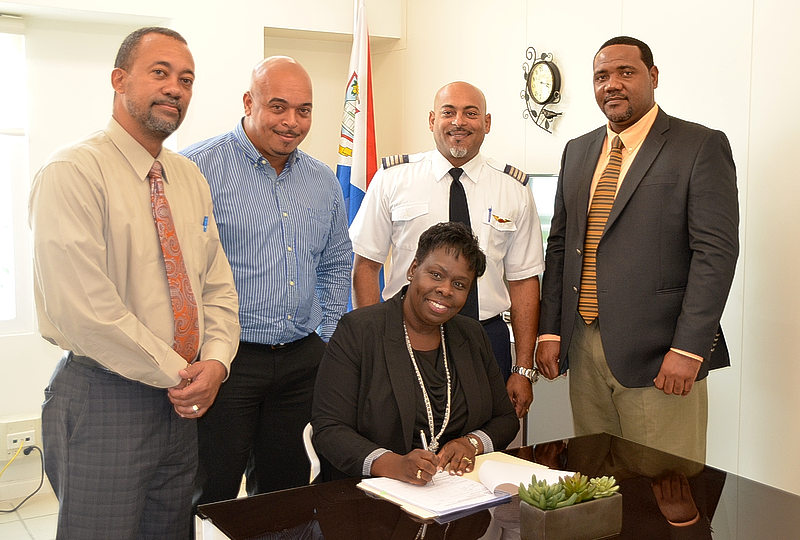 The economic permit allows SXM Airways to move forward with its operations and begin service. The signing was also a historic first for the Civil Aviation Department.

Civil Aviation advised the Minister to grant the permit based on the advice from the Central Bank, which found the overall plan for SXM Airways to be realistic and feasible, and the company shows sufficient financial resources to cover the initial start-up phase of the company and its first six months of operation, which is a requirement by law.

The Directors of the company, Elvis Queeley, Michel Carter and Jeff Oliver were all present for the signing along with Head of the Civil Aviation Department Lou Halley. Oliver described the moment as a dream come true for three hard-working young men who want the opportunity to show their children that they can dream and then live their dreams.

The directors of the airline will now finalize the process to obtain the airline’s Air Operator Certificate (AOC) to allow the company to use its aircraft for commercial purposes. Most of this work is already done. The certificate will list the aircraft types and registrations to be used, for what purpose and in what area etc.

The economic permit is for three years. SXM Airways will operate a nine-seater BN2 Aircraft to deliver on-demand charter service to surrounding islands. Managing Director Elvis Queeley explained that the goal is to grow the company from one to three aircraft within three years and expand the type of service the company can offer.

Minister Doncher-Arrindell expressed how proud she was of the three directors, who she described as local, driven and hardworking. “I can imagine that the market and the airline industry is not an easy one and you will have challenges, but I am very proud of you and wish you nothing but the best of luck moving forward,” the Minister told the airline directors.

“Many thanks also to Lou Halley and his team at Civil Aviation for whom this is also a first. It is a first for St. Maarten, a very proud moment in our development and it has added significance because this is a locally run business by local young men who doesn’t see the sky as their limit, but the opportunity for greater things to come,” the Minister added.