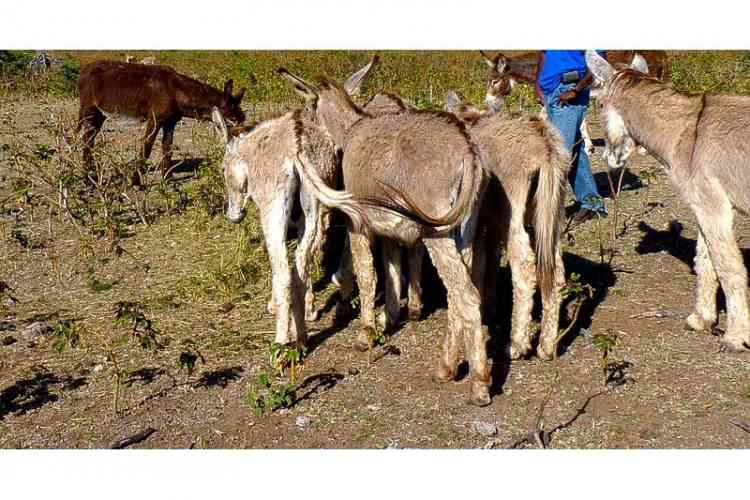 Donkeys waiting to be fed at Statia Donkey Sanctuary.

ST. EUSTATIUS–The donkey sanctuary in St. Eustatius will be downsized as fewer donkeys will be taken care of at the establishment, Acting Government Commissioner Mervyn Stegers stated.

A couple of years ago, residents cut the fence around the sanctuary to enable the donkeys to get out. The fence was cut, Stegers said, because people believed that the donkey sanctuary did not have enough food to feed all the donkeys.

Which, he said, is not true at this moment as the sanctuary does have enough feed and water for the donkeys. “Although,” he added, “there was a point where the feed was too little and that is why the donkeys do not look in the best of shape. The weak donkeys were not getting enough to eat as the dominant donkeys would eat first and that is probably one of the reasons why one or two of them have died.”

Therefore, the island government wants to separate the dominant donkeys from the more submissive animals so that all have a better chance of obtaining sufficient water and feed.

Stegers said that some of the donkeys will be removed from the island. “There will be only a few left on the island, which will make handling them much easier.”

As there are currently too many donkeys for the sanctuary to manage, some 10 to 15 donkeys are to remain and be included in the touristic project that will include donkey carts, an initiative of Donkey Sanctuary’s Manager Ilka Schmidt.

“One of the best things we plan to do with the donkeys is to get them to work. Therefore, we are working on a plan to bring them out of the Donkey Sanctuary for people to see them. We are going to combine the donkeys with tourism. The idea for donkey carts for island tours has been there for a couple of years, but it was never executed. We are trying to obtain funds to purchase three donkey carts,” said Stegers.

Every cart will be pulled by four donkeys, as they do not want to put too much weight on the donkeys. One potential route is along Orange Bay Road to Upper Town.

Schmidt said she would also like to do island tours with the donkey carts, similar to the walking tours. Stegers said this is a “very good” idea. “We are all very enthusiastic about the idea.”

Persons from other islands who want a Statia donkey only have to pay for the transport of the animal to its destination.

Stegers said two donkeys were sold to Saba last year. One of the donkeys ate toxic berries and died. Therefore, they plan to replace the deceased animal.

“Like all foundations, the Donkey Sanctuary can always use more volunteers because they do a wonderful job, but there are simply too many donkeys,” he said.