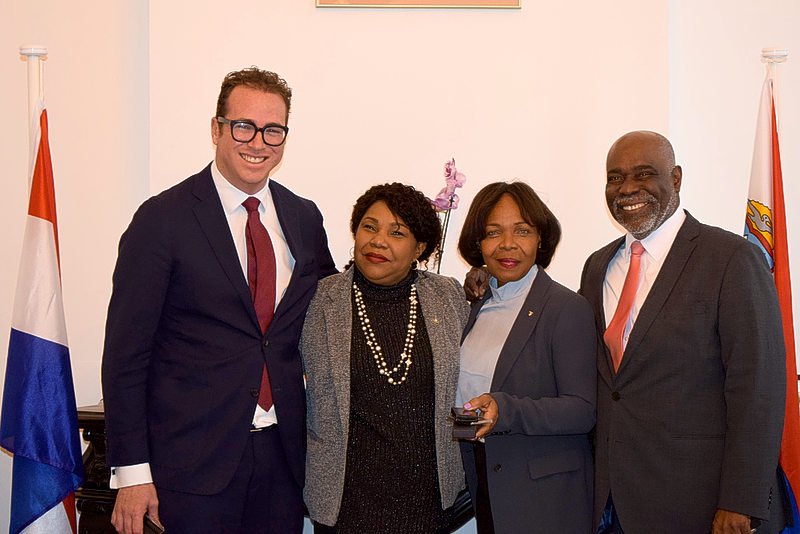 St. Maarten, Curaçao and Aruba Ministers embrace after pledging to always support each other in times of need.

PHILIPSBURG–Minister Plenipotentiary Henrietta Doran-York on Wednesday formally thanked the governments of Curaçao and Aruba for assisting with and coordinating emergency aid for St. Maarten prior to, during and in the aftermath of Hurricane Irma.

Doran-York extended the thanks to the respective governments via Minister Plenipotentiary of Curaçao Anthony Begina and Aruba Juan David Yrausquin and Minister of Education of Curaçao Marilyn Alcalá-Wallé during a meeting at the Cabinet of St. Maarten on Wednesday November 8.

Alcalá-Wallé is on a working visit to the Netherlands. Doran-York presented the Ministers with a token of appreciation on behalf of the Government and people of St. Maarten.

According to a press release issued on Monday, Doran-York thanked the governments for their immediate support to strengthen the human capacities in St. Maarten by sending personnel in various fields of expertise.

She lauded the Aruban government’s emergency medical response to and the housing of persons in dire need of medical treatment. She also lauded the various Aruban organisations that have offered their assistance to the people of St. Maarten since the passing of the hurricanes, including the citizens of Aruba who took St. Maarteners into their homes during those difficult days. The Minister also made mention of the schools in Aruba that made it possible for students of St. Maarten to continue going to school during their stay.

The Government of Curaçao was thanked for functioning as a hub for the emergency assistance to St. Maarten after the hurricane. The Minister highlighted her visit to the emergency shelter that was set up in Curaçao, while she was en route to St. Maarten after the hurricane. She thanked the government of Curaçao for granting temporary housing and access to basic living necessities to the many St. Maarteners who were forced to evacuate.

She singled out Minister Alcalá-Wallé and her Ministry for opening up schools to the children of St. Maarten and thanked the hundreds of families in Curaçao that made their homes available as well.

She said this experience reinforced her belief that the Caribbean countries within the Kingdom are committed to stand together and support each other through thick and thin.

Doran-York had previously recognised and thanked the Dutch government and individual Dutch Ministers for their support and contributions to St. Maarten.