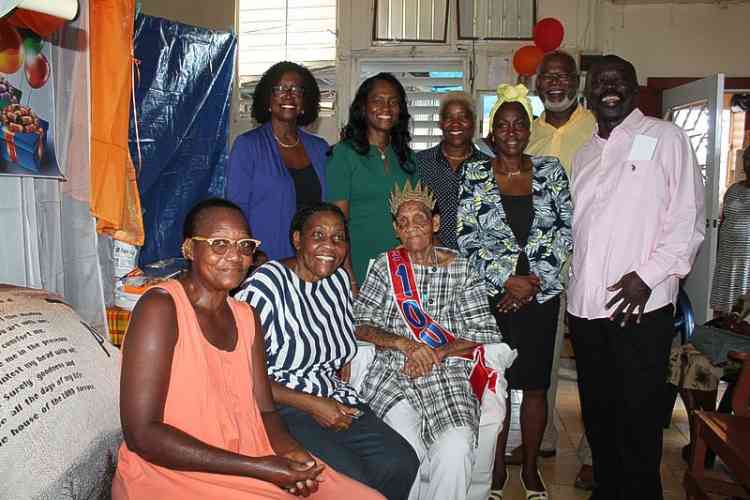 It seemed as if the whole neighbourhood had crowded into the living room to congratulate her, leaving little room for the food and champagne, as she sat serenely holding court.

Also paying tribute to her longevity was Director of the Elderly and Disabled Care, Evelyne Ratchel, and other representatives from the Department of Solidarity and Families, Dr. Patrick Dequin, and Willy Zeline a representative from the Red Cross which donated a fridge to Barry.

Throughout, Miss Dorcille was bright and alert, taking the adulation in her stride and occasionally chatting to guests. Asked what the secret was of her good health, she replied playfully: “If I told you, it would not work anymore.”

Paul Whit in his remarks said she is blessed at this age not only to have good health, but to have the mental capacity of a woman far younger. Valérie Damaseau added: “Even if this was an open field instead of a living room, everyone would come out to share this milestone with you. You are well surrounded and loved. On behalf of President Gibbs as well, we wish you many more birthdays.”

Lions Club members, when they visited her after Hurricane Irma quoted her as saying she hopes to outlive her mother who passed away at 102 years. She also told them she had not been afraid during the hurricanes.

Dorcille Barry was born in Dominica. Her main profession was selling provisions by boat, travelling up and down the islands. Bad weather meant there were often rough trips. Once the boat she was on almost sank and she fell overboard, but was rescued by the crew who threw her a line and hauled her back on board. She moved to St. Martin in 1933, a time when there was only one taxi on the French side.

Later, when she married she helped her husband, a farmer and carpenter, on the farm they had, but when she had children he wanted her to stay home and look after their children.

Julien Gumbs: ‘St. Martin in all sectors regained a certain dynamism in 2022’...