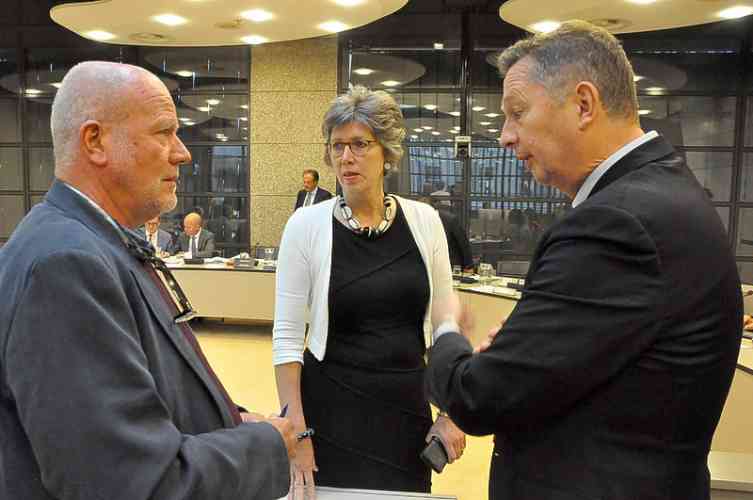 THE HAGUE–Thursday’s debate in the Second Chamber of the Dutch Parliament about the Dutch intervention in St. Eustatius didn’t yield any concrete answers about whether there will be Island Council elections in March 2019. But State Secretary of Home Affairs and Kingdom Relations Raymond Knops did provide an overview of the pending projects.

During the much-anticipated debate, Members of the Second Chamber’s Permanent Committee for Kingdom Relations expressed their disappointment about the lack of visible progress since the Dutch government took over the St. Eustatius administration on February 7 this year, as well as the fact that there is no clarity as to whether the Island Council elections will take place in March 2019. Former Island Councilmember Koos Sneek of the St. Eustatius Democratic Party attended the debate.

The Members of Parliament (MPs) all recognised the importance of the voting rights of the Statia people. André Bosman of the liberal democratic VVD party, Joba van den Berg of the Christian Democratic Party CDA, Ronald van Raak of the Socialist Party (SP) and Stieneke van der Graaf of the ChristianUnion suggested as a transition format, an intermediate form whereby there would be Island Council elections in March, but that the local government would remain under the watch of National Government Commissioner Mike Franco as long as is necessary.

Van Raak and Nevin Özütok of the green left party GroenLinks expressed clear support for the Island Council elections in March next year, when the Statia people will also indirectly vote for the First Chamber of the Dutch Parliament, the Senate, through an Electoral College.

MP Van den Berg said that during the visit of the Second Chamber delegation to Statia in July this year, many people expressed concern about the lack of an elected Island Council. Both Van den Berg and MP Antje Diertens of the Democratic Party D66 asked the state secretary whether the elections for the First Chamber through the Electoral College would proceed if there were no Island Council elections.

State Secretary Knops assured that the elections for the First Chamber through the Electoral College was a “completely separate” issue and that these elections would proceed for sure. He could not say whether the Island Council elections would go ahead in March. He promised to provide more clarity when he sends a progress report about Statia to the Parliament mid-November.

In that progress report, Knops promised to also supply a complete overview of the projects that are in execution or are almost ready to start. Pending that overview, the state secretary mentioned a number of projects in the area of infrastructure, housing and government.

The second phase of the home reconstruction project, under which more than 100 homes have already been repaired and another 30 are pending repair, will be completed by the end of this year. The construction of five roads in the Cherry Tree neighbourhood will kick off on November 16. Two other “important roads” will be overhauled in the course of next year. Knops said that logistically it was not possible to repair all roads at the same time because some roads need to remain open for daily use.

The Cliff erosion project will start in December this year and should be completed late 2019. The state secretary explained that this was a very large, technically complex project that would require time. As for car wrecks, he stated that 300 wrecks had already been removed and that the remaining wrecks would follow in the first quarter of 2019. The project to collect rainwater started in September.

Preparations have started to connect Statia to the 5G telecommunications network. MPs Bosman and Van Raak specifically asked for action in this area. Implementing 5G will take some time and involves talks with stakeholders, said Knops. He also announced that the training for 180 civil servants in Statia would start in October.

The state secretary said “a lot had to be done” on the island and the number of projects was a challenge. He said it was not possible to immediately start a project once the financial means were available as there were the aspects of procedures, planning and the capacity of the local companies that needed to be taken into consideration. “There is a certain incubation time and things have to be done well,” he said, but he promised that very soon a number of projects would start.

Knops assured that the local (construction) companies were involved as much as possible to stimulate the island’s economy and to create employment for the people. Having local companies build roads and carry out repairs also created a sense of pride, he added.
The MPs criticised the long time it has been taking to start the infrastructural projects on Statia. They blamed the complex bureaucratic rules of the Dutch government for the tendering and executing of projects. “The bureaucracy in The Hague is slowing down the projects,” said MP Özütok, who called on the Dutch ministries to replace the bureaucratic thinking with pragmatism.

MP Bosman suggested executing projects through the Public Entity St. Eustatius as this would mean fewer regulations. He said a pragmatic approach was necessary to get the projects moving. “We need the ministries to move.” If that required an “unorthodox solution,” so be it, he said.

MP Van Raak concluded that managing Statia and making investments on the island from “10 office towers in The Hague” did not work and that something needed to be done about “this structural problem.” MP Van den Berg suggested keeping things simple with an eye for the local situation. Don’t pretend to build a highway, but a simple road, she said.

Knops said he understood the impatience and that he also felt the same. “We need more to show to the people. We have the obligation to deliver and I am very motivated to do just that.” He pledged to keep insisting on the ministries getting things done in a speedy manner. “The idea is not to export the bureaucracy of The Hague to Statia.”
He announced that he would visit Statia early January 2019 with Minister of Infrastructure and Water Management Cora van Nieuwenhuizen and State Secretary of Social Affairs and Labour Tamara van Ark.