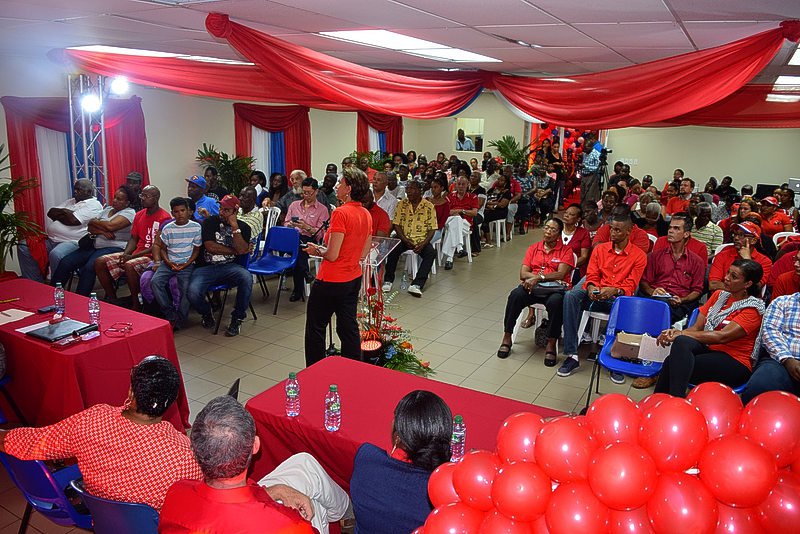 PHILIPSBURG–The country’s oldest party – the Democratic Party (DP) – is not dying, rather it is “dedicated to the people” and ready to sweep the September 26 Parliamentary Election.

This was the message party leader Member of Parliament (MP) Sarah Wescot-Williams delivered to supporters at the launch of the red party’s manifesto and eighteen of its candidates in John Larmonie Centre on Friday night.

Wescot-Williams described the initial 17 candidates introduced to supporters as the “people who are capable to assist me in taking this country forward.”

Wescot-Williams advised candidates to answer any query about running with DP by saying, “Why not DP, because who is better?”

Inclusion has always been a DP tenet. The party was the one that decades ago “opened its arms” to everyone who wanted to come to St. Maarten and was highly criticised for it. However, today some critics of that openness policy are “courting” the same people they were against. Wescot-Williams declared there should be “no bigotry” and “no bias” in Parliament.

Lee said he was proof of DP’s inclusiveness.

More candidates will be on the DP slate when it is submitted to the Main Voting Bureau on Monday. A maximum of 23 candidates are allowed by electoral law to be on a slate.

DP, with one seat in Parliament and one minister, has been able to have milestone accomplishments in the past nine months of the current coalition Government. In the seven weeks leading up to the election DP “will do something important every week” and each of those things is significant enough “to gain” the party “a seat every week.”

Prefacing the week-by-week plan, a fiery Wescot-Williams said DP believed in “why do later?” things that can be done today. Seven, she said, is a number of abundance and foundation of everything.

Starting off week one, Lee will present evaluations of the bids for the new hospital tomorrow, Sunday.

For week two, Wescot-Williams is hopeful that her coalition partners will follow up on the solution presented by Lee to end fires on the landfill.

A solution to end the abuse of the short-term labour contract, derived from discussions with the business community, will be presented in week three and in the following week pensioners who worked on the Dutch side, but now live on the French side, will see the full restoration of their pensions. Their pensions were cut because they were deemed as “living abroad.”

Proposals for electoral reform extending to the Rules of Order of Parliament will be on the table for approval in Parliament in week five.

The legislation to regulate the timeshare industry and establish a timeshare authority will be on the floor of Parliament for approval in week six.

A code of conduct for MPs will be presented in week seven. Such a code is “very much needed” by some current MPs, Wescot-Williams said.

She party leader told supporters that if DP can accomplish the things she outlined in seven weeks and with one MP and a minister, “imagine what we can do with two, three … seven seats.”

In week eight, DP will go into the election with “conviction and passion that cannot be matched.”

While the election campaign “will have a lot of bling [for other parties – Ed.], nothing beats working for the people” as DP does, she said.

Lee is “extremely proud” with what DP has accomplished in the past nine months and is left “drooling” when he thinks about “what we can do with more seats.”

Taking a cue from the national conventions of the Democratic and Republican parties of the United States, Wescot-Williams was introduced at the start of the evening by her daughter Wallenda Matser.

DP President Gumbs said the party slate is peopled with “professional and dedicated” candidates who are, as the party slogan says, “dedicated to the people.” She added, “Tough times are not ahead; tough times are here now” and DP is the party to bring a solution.