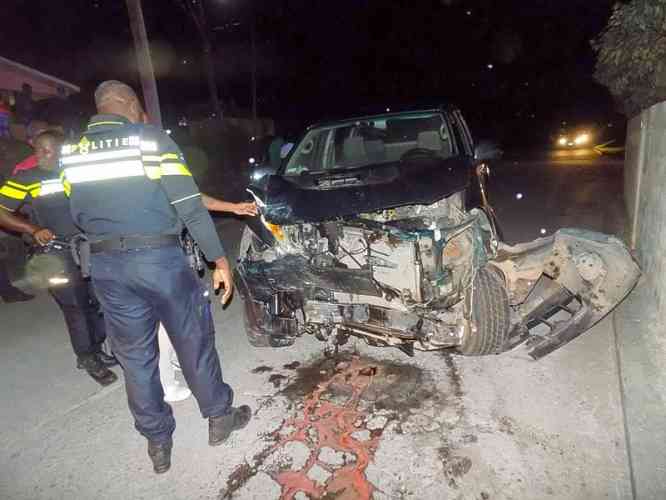 The red Renault E530 after the accident.

ST. EUSTATIUS–One person was injured in a traffic accident which occurred on the crossing of Sandy Road with Jeems Road.

On arrival at the scene members of the St. Eustatius Fire Department and Ambulance Department encountered one male occupant in a red Renault E530, who was stuck in the damaged vehicle. He was freed by fire-fighters using the jaws of life.

The male driver’s leg was pinned inside the vehicle. One of the car’s doors had to be cut off for the man to be freed from his vehicle. He was transported to Queen Beatrix medical Centre (Q.B.M.C.) by ambulance.

The second vehicle involved in Friday night’s accident was a green Toyota Hilux E121 truck. The driver of the pickup was driving on Sandy Road from the sports field. The impact of the blow spun the pickup truck back into the direction of the field. The female driver of the vehicle was also transported by ambulance to QBMC for further examination.

The driver of the pickup truck said that she was thankful that she was alone in her vehicle as normally she would be transporting a number of children to various locations. She said that just before the accident she had dropped off a child at Earl N. Merkman Sports Complex and was travelling back to her home when the accident took place.

Traffic was redirected by the police and an investigation is being conducted to determine who was at fault.

The police advised the public to pay heed to the traffic signs at intersections, regulate the speed of their vehicle and act accordingly. A good majority of accidents that have taken place in Statia have occurred at this particular intersection.