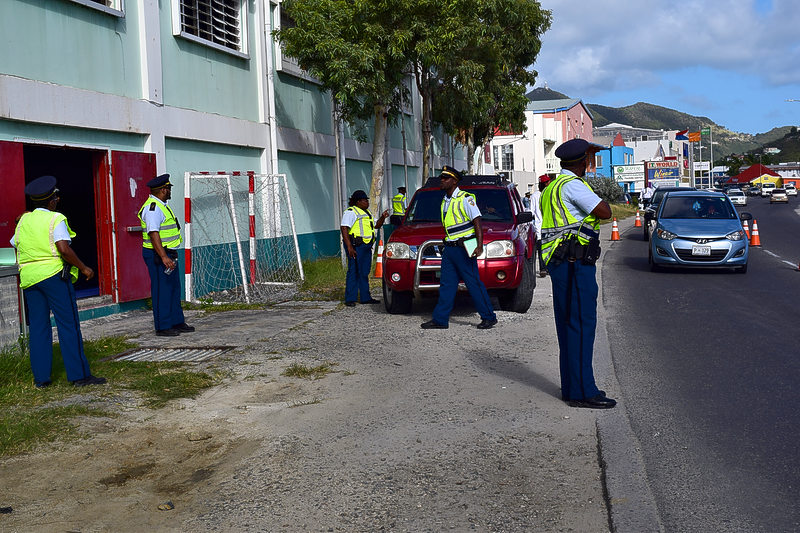 PHILIPSBURG–Police announced this past weekend that several drivers had avoided stop signals given by officers during their traffic controls near Le Grand Marché Supermarket on Bush Road and had driven straight past the officers, who had to jump out of the way.

Police spokesman Chief Inspector Ricardo Henson said the behaviour of these two drivers and motorcycle rider was totally unacceptable by the police.

“The actions that these persons have chosen to take to avoid being stopped by police are a criminal act. If these officers did not jump out of the way there is a great possibility that they could have been seriously injured or even lost their lives,” stated Henson.

The controls on Thursday last week were held at several locations from 8:00pm to 12:00am. A total of 46 vehicles were stopped and examined during the controls. These controls led to the arrest of the men H.R.P. (26), J.J.A (21) and J.H.A. (19) for possession of a substantial amount of marijuana that was found in the vehicle in which they were travelling at the time of the control.

Henson said, “Two police officers taking part in the controls were intentionally driven into by the two vehicles driven by unknown persons who, for whatever reason, did not want to be stopped by police.

“The officers in question gave the drivers of the vehicles a timely and noticeable stop sign and directed them where they should bring their vehicles to a stop to be controlled. These drivers, however, did not adhere to the stop sign and other instructions given by the police officers, but instead increased the speed of their vehicles and drove directly at the officers, obligating them to jump out of the away to avoid being run over,”

A motorcycle rider decided that he was not going to be stopped by police during another general traffic control on Saturday. He intentionally rode his motorcycle at the officer who gave him a stop sign and officer had to jump aside to avoid being run over.

Investigations into the identities of these two drivers and motorcycle rider are ongoing. Once these persons have been identified they will be arrested and charged.

The police inform the community that they will not accept and will not be intimidated by this type of aggressive criminal behaviour and will not stop carrying out their duties.

These controls, in fact, will continue to intensify. The police are here to serve and protect the community of St. Maarten. The community is asked to give their fullest cooperation during these controls, which are to the benefit of everyone’s safety.