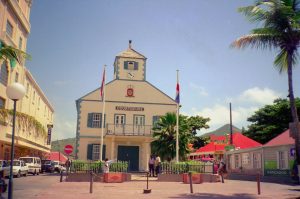 PHILIPSBURG–A 32-year-old drug-dependent woman was sentenced Wednesday by the Court of First Instance to 200 days, 100 of which were suspended, on three years’ probation. Janine Jenneffer Wijman was found guilty of driving off in a Police car, causing a lot of damage in the vicinity of Burger King on Union Road on July 30.

Police officers were called to the scene by Burger King employees informing them that a woman was using drugs in the establishment’s restroom. The officers arrived at 3:50pm and arrested the woman on the spot. She reportedly was handcuffed as she resisted her arrest, but the woman told the Court on Wednesday she had no recollection of the event at all.

Wijman told the Judge she had used crack in the morning and had smoked some marijuana before going to Burger King. She said she had panicked as she was afraid her handbag, with her wages of NAf. 1,700 and a cell phone in it, had been stolen.

The Police placed the handcuffed woman in the rear of the Police vehicle but somehow she managed to force herself through a small sliding glass window between the front and rear seats of the vehicle. She drove off with the vehicle toward Ace Mega Center, Cole Bay.

Officers ran after the Ford Interceptor Police vehicle and attempted to smash its window with their batons, but the woman continued driving. The suspect hit three vehicles while fleeing from the Police and almost drove into Lulu’s Bar.

One officer drew his weapon and shot at the window of the Police car. The shot shattered the glass on the driver’s-side door, causing the suspect to suffer injuries to her shoulder. The woman continued and drove into the yard of a house on Celsius Road, where she was rearrested.

The Court found her guilty of seven of the eight counts mentioned in the indictment. She was charged by the Prosecutor’s Office with disobeying a direct Police order, resisting arrest, theft/joyriding, hit and run, destruction, driving without a driver’s licence, driving under the influence, and dangerous driving behaviour.

The Court followed Prosecutor Nanouk Lemmers’ recommendation not to find theft of the Police car legally and convincingly proven and acquitted Wijman of this charge. Joyriding, however, was found proven. Wijman was also acquitted of driving under the influence, as this could not be proven because the suspect’s blood-alcohol level had not been tested.

Requests for psychiatric or psychological assessments of the defendant’s state of mind, which were filed by attorney Sjamira Roseburg, were considered unnecessary by the Court.

The notorious drug user said she did not have a driver’s licence, but “I cannot imagine that I have done something like that,” she told the Court. She is suffering from constant headaches and migraines and is hearing voices inside her head. “I had a blackout and have no recollection of what happened, only that I was being shot at.”

The mother of two children ages 12 and eight, who both live in the Netherlands, in 2011 spent three months in Capriles clinic in Curaçao to kick her drug habit.

On November 25, 2015, Wijman was sentenced to 150 days, 90 of which were suspended, on three years’ probation, for car theft. The Prosecutor called upon the Court to also sentence the defendant for the 90 days mentioned in last year’s verdict. For the new crimes, the Prosecutor requested 200 days, 100 of which were to be suspended, on three years’ probation, and mandatory treatment for addiction.

Attorney Roseburg questioned the way in which the suspect was arrested, as she was left alone in the vehicle. “Was my client handcuffed, and was she actually sitting in the back of the car,” the lawyer said, stating that the officers had been negligent in leaving her client in the car with the motor running.

The lawyer said her client was not punishable as she was suffering from psychosis and could not be held accountable for her acts at that time. She therefore called upon the Court to dismiss her client of all prosecution and to reject the execution of the previous sentence.

The Court granted the woman a second chance, and decided not to impose the previous sentence, but extended the probation period with one year extra. The Judge urged Wijman to take her life into her own hands and make efforts to kick the habit.