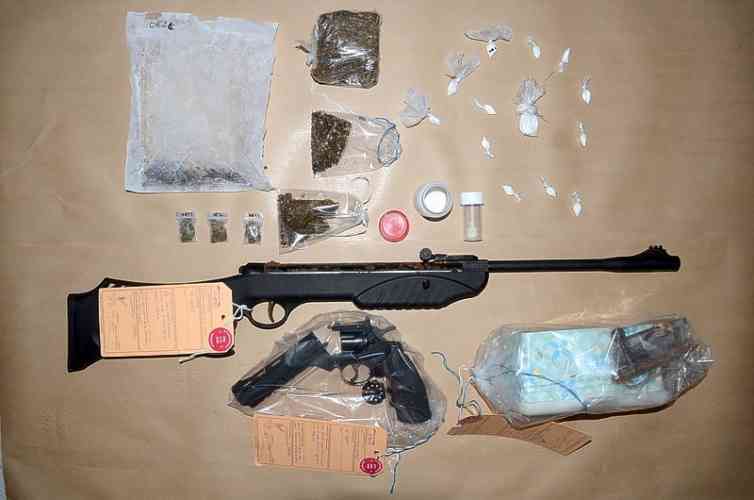 MARIGOT–Four drug dealers have been arrested and a quantity of drugs, cash money, and fake firearms have been confiscated, Prosecutor Yves Paillard disclosed Friday evening.

The four suspects, three from St. Martin, are ages 20, 22 and 28 years. A fourth individual was held and already possesses a conviction for violence in 2010.
According to the Prosecutor’s release, all four are cannabis consumers and implicated in street dealing of drugs, notably on Rue des Ecoles, Grand Case.

The group had been under surveillance by the Gendarmerie for some time. They were dealing in cocaine and cannabis, making some 10 transactions per day, in direct contact with clients.

Three of the group were taken into extended custody on Wednesday. Seized were 400 grams of cannabis, some 30 grams of cocaine in sachets, a weighing scale, US $2,000 in cash and a vehicle.

It was noted the suspects were not talkative about their activity while in custody. They had attempted to keep drugs and money in separate places, and kept nothing on their own persons. The four have been summoned to court in St. Martin on April 26.

In a separate operation conducted by the Gendarmerie, three individuals were arrested in St. James, Marigot, on Thursday afternoon. Confiscated were 50 grams of crack cocaine, $200 and 100 euros representing transactions done on the spot.

Stolen goods, products from the looting after Hurricane Irma, were found in the house of one of the suspects. This merchandise included clothing, a refrigerator, garden furniture, etc. No further details were given on this latter operation.