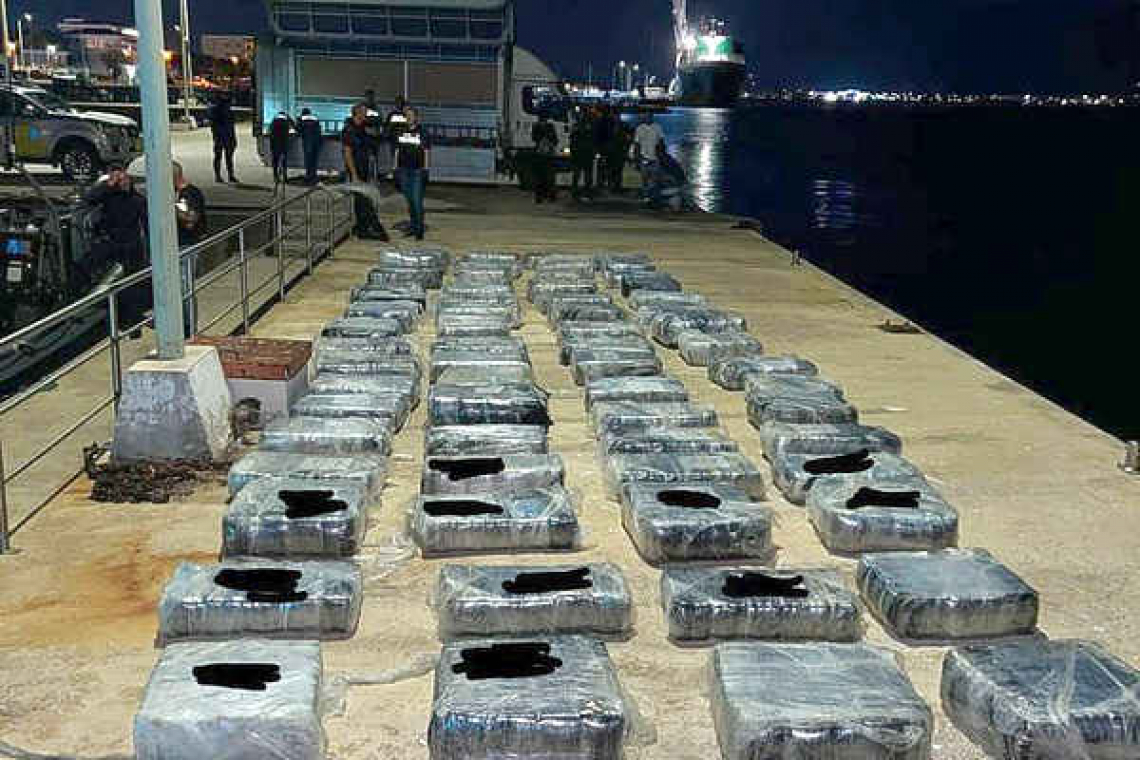 Drugs retrieved from a powerboat and the sea on August 8.

PHILIPSBURG–Patrol ship Zr. Ms. Groningen of the Royal Dutch Navy makes it quite difficult for drug smugglers in the Caribbean region, the Dutch Caribbean Coast Guard concluded after catching 1,600 kilogrammes of drugs. Two weeks ago, an equally large amount was captured.

Zr. Ms. Groningen arrived in the Caribbean in April 2022 and has been patrolling the Dutch Caribbean region ever since. The crew has so far captured more than 5,500kg of drugs during seven interventions. The last time was on August 8.
Where the navy ship intercepted the go-fast with drugs has not been disclosed by the Coast Guard, but it was revealed that the eight suspects on the drug vessel were handed over to the Dutch Caribbean Police Force KPCN, the police force of Bonaire, St. Eustatius and Saba (the BES islands).
The go-fast was discovered by the Maritime Operation Centre (MOC) of the Dutch Caribbean Coast Guard on the night of August 7. The MOC alerted the Zr. Ms. Groningen immediately, according to a report.
The Coast Guard stated: “The ship was present the next morning in the area and launched both fast interceptors FRISCs, which intercepted the go-fast. The crew on board the go-fast threw the packages of drugs overboard when they realised they were being chased. Once Zr. Ms. Groningen was alongside, the go-fast was ordered to stop and the suspects surrendered.
The crew of Zr. Ms. Groningen and the Dutch Caribbean Coast Guard removed 66 packages with a total of 1,600kg of drugs from the water. The drugs were destroyed by order of the prosecutor.
Two weeks ago, the crew of the Zr. Ms. Groningen detected a go-fast with drugs near Curaçao. The powerboat with five suspects on board immediately raced away. The Dutch Caribbean Coast Guard gave chase and fired several shots to force the go-fast to stop. One of the passengers was killed.
The Venezuelan crew managed to throw several bales of drugs overboard during the chase. Eventually, 1,620kg of drugs were seized on the boat. The Coast Guard arrested four men and handed them and the remains of the fifth suspect over to the police of Curaçao.
The drug seizures in the past four months, since the arrival of Zr. Ms. Groningen in Curaçao on April 19, exceed the 3,300kg intercepted in 2021 and come close to the 5,842kg of drugs that were seized in 2020. The investigative activities in the area continue.
The Coast Guard attributed the lower drug seizure in 2021 to the consequences of the ongoing COVID-19 crisis and the probably-related decline in the amount of sea traffic to the countries in the Caribbean part of the Kingdom of the Netherlands. For example, following 2020, the Coast Guard also recorded a decrease in the number of landings in 2021 in which undocumented persons from Venezuela tried to gain illegal access to the Leeward Islands.
Increases in sea traffic, drug transports and landings of undocumented persons will be observed in 2022, as witnessed by several reports in the course of this year.
The focus of the Coast Guard’s deployment is on judicial investigation tasks. These are carried out under the authority and direction of the Prosecutor’s Offices OMs of the countries. They determine the judicial prioritisation and record it in the Judicial Policy Plan, which is adopted every four years.
The Judicial Policy Plan 2018-2021 has not yet received a follow-up; the four countries have yet to adopt a new policy plan for the coming years.
The annual plan 2022 for the Coast Guard was presented in February. It describes the introduction of unmanned systems. The Coast Guard has six drones of its own to support its image construction.
The unmanned aircraft Reaper MQ-9s are military assets that have been tested by the Ministry of Defence in 2022 in Curaçao for use in the region. For the Coast Guard, these MQ-9s can be deployed after a request to the Ministry of Defence for military assistance.
Patrol ship Zr. Ms. Groningen will become the first navy ship in the world with a so-called hull vane, a wing that can be compared to a spoiler on the back of a sports car, with the difference that the hull vane is mounted at the bottom of the rear of the boat. The wing generates additional driving force and reduces the wave action around the vessel.
The Royal Netherlands Navy expects that the hull vane can save 13% of fuel. Its installation is planned for early 2023, when the ship is back in Den Helder. After the annual maintenance, the patrol ship will set sail for the Caribbean again.
The four countries jointly contribute to the expenses of the Dutch Caribbean Coast Guard. At the end of 2021, St. Maarten still had to pay its contribution of 0.840 million euros to the Coast Guard’s investment budget.