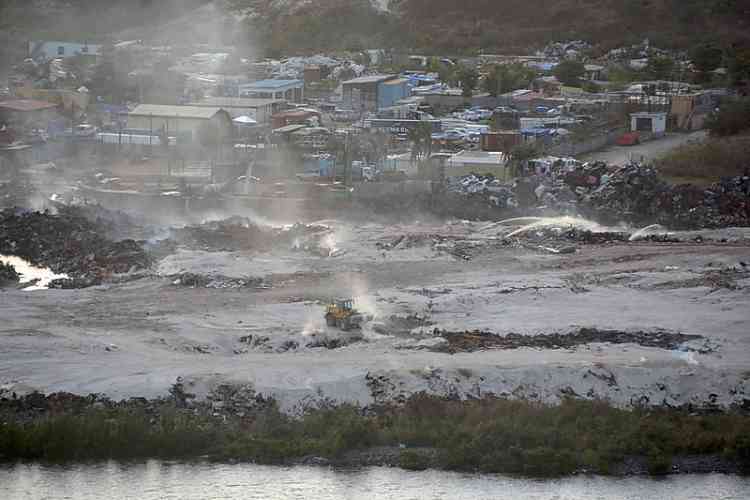 POND ISLAND–The fire on the dump in the centre of the country reignited by Sunday’s heavy wind gusts is prompting the Fire Department to advise residents downwind to safeguard against smoke by closing windows and doors.

The Department said smoke can cause discomfort to persons who suffer from asthma, shortness of breath, or any other respiratory challenges.

Fire Department and dump management company personnel tackled the flare-up as soon as it occurred and continue to monitor the situation.

The country’s principal dump site and the “Irma” dump, located a short distance from each other, were both on fire last week. Those blazes, according to Government, appeared to have been set by arsonists. The resulting smoke forced the closure of sections of Government, schools, and a number for businesses for three days.

Although the fire was extinguished on the surface of the dump in the latter part of last week, Sunday’s flare-up points to its continuing to smoulder below the surface.

Environment and Infrastructure Minister Miklos Giterson said in the Council of Ministers press briefing on Wednesday that an official complaint had been filed with law enforcement with the goal of triggering an investigation into the two fires.

“It is strongly believed that these two fires were man-made,” he said. “This dump is a monster that needs to be stopped.”

Health Minister Emil Lee told Parliament last week that the terms of the flawed management contract awarded under the former National Alliance-led government were at the root of the garbage fires. That contract was renewed for another year in December 2017 without any attention paid to its flaws.

One glaring flaw is a fixed provision of soil/dirt to cover the garbage. The contract calls for the company to supply 400 cubic metres of dirt weekly. This means when garbage exceeds that amount it remains uncovered, letting oxygen settle in crevices – a main ingredient in fires.

The flawed contract is “a direct contributor” to the constant fires on the principal dumpsite and now on the Irma one, said Lee.

Aside from insufficient dirt to cover garbage, security measures mandated by the contract were never taken. Lee said the contract calls for security 24 hours a day, seven days a week. This is sorely lacking, as are the minimum eight security cameras that should be monitoring the principal dump. Security and proper monitoring would have served to apprehend the culprits in what have been termed arson-related fires.