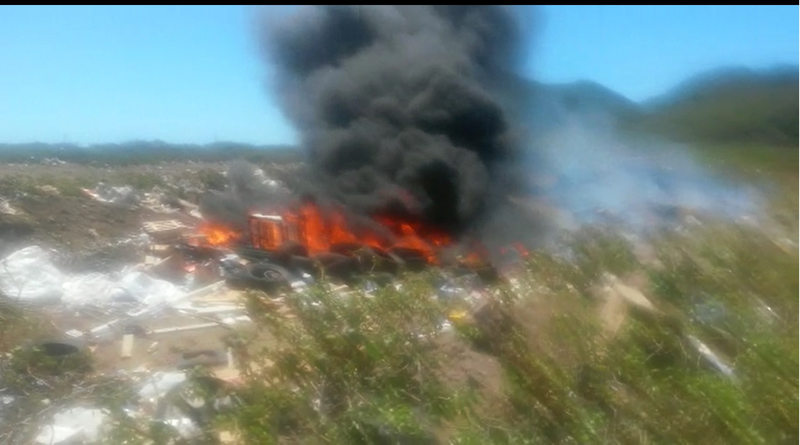 ST. EUSTATIUS–Black smoke was billowing from the dump site on St. Eustatius on Sunday morning. The smoke on the dump could be seen from as far away as Lower Town area. The smoke and smell cause problems to residents in Concordia and to people living and working in the vicinity of F.D. Roosevelt Airport.

Fires have become a regular occurrence at the dump for some weeks now. The fires are difficult to combat as it is sheer impossible for members of the Fire Department to reach the fires, because the access way to the dumpsite is blocked by illegally-dumped garbage.

Commissioner Charles Woodley addressed the situation at the dump in a live radio programme on Sunday. He said illegal dumping has caused the entrance to the dump to be blocked. As a result, people have been dumping their garbage anywhere in that area, including on the road and the path leading to the entrance of the dump.

According to the Commissioner, even a person who was a high-ranking official for many years, and who “should have known better” had been guilty of illegally dumping in the area.

Woodley said the Island Government will start building a fence around the dump to get better control of the coming and going at the site.

“There are sacks that go on and on all over this area. This will cause further issues down the road, so we are taking action now,” Woodley said about Government’s efforts to take the situation at the dump under control.

“We have to be proactive when it comes to issues affecting the island, because Statia is our island,” he said.

The St. Eustatius Fire Department was at the scene of the fire at the dump on Sunday. Police Officers were also in the vicinity.

The very black and thick smoke caused limited visibility at the dump site, which is near the area where aircraft are lifting off when departing the airport. Security officers and other workers at the airport have complained about the smell.

A man who works directly below the dump, said that when the wind is blowing in their direction his colleagues and he have issues with the air quality. He said even when inside the building, they can hardly breathe, as the smoke can be very thick.

Many residents of Statia are becoming increasingly concerned about the numerous fires, whether these are caused by accident or are intentionally lit, as the fires are causing breathing issues. The island is currently experiencing very high winds which are considered a very dangerous weather situation where the fires are concerned.