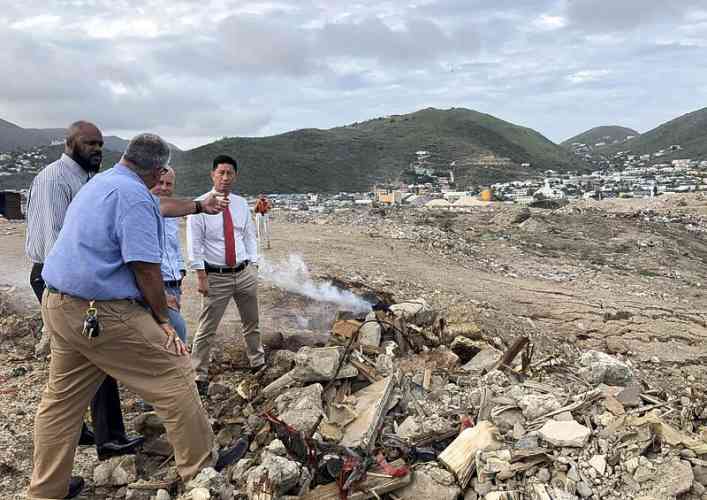 PHILIPSBURG–St. Maarten residents Barbara Cannegieter and Camiel Koster and law firm Bergman Zwanikken Snow Essed (BZSE) who filed a Court case against Country St. Maarten, the Ministry of Public Housing, Spatial Development, Environment and Infrastructure VROMI and current management company of the landfill Robelto and Son B.V. on August 24 are still waiting for a plan of action and several reports pertaining to the fires and the emanation of smoke, gases and foul smell at the sanitary landfill on Pond Island.

They believe that government is hiding itself behind the World Bank, they said Friday in a statement to the Court.

During the September 27 hearing of the injunction, which the Prosecutor’s Office has joined in the meantime, the Court stated that it expected government to present a roadmap for the prevention of fires and the emanation of smoke, gases and foul smell; copies of the assignment of research and the test results by certified industrial hygienist EE&G in Miami, Florida; and a report by the Ministry of Defence. Litigants were to create or appoint a foundation to manage any penalty payments that may be imposed.

The Court also provided deadlines for government to submit progress reports, with the deadline for a second report set for Friday, November 23.

Government submitted the roadmap to the Court on October 17, but added that the roadmap has not yet been approved by the Council of Ministers, while signing of the World Bank grant agreement has been delayed until the third week of November.

“The claimants on the one hand understand that the fire suppression must be well-prepared, but Country St. Maarten has known for a long time that the emission of smoke, smell and gases was a major problem.

“It has known about these summary proceedings since August, but it seems that Country St. Maarten wants to hide behind the grant agreement and the conditions of the World Bank and takes little or no initiative to solve this problem.

“Government also loses sight of the fact that it is St. Maarten’s problem that long existed before Hurricane Irma. The country must, therefore, also be able to solve the smoke problem by itself,” litigants stated.

In response to the roadmap and the progress reports, they said that only the Emergency Debris Management Project (EDMP), which includes fire suppression and the upgrading of the “disposal site” and “monitoring health,” are relevant for the legal procedure.

Government is estimating the cost of fire suppression at US $6.1 million, litigants say, who claim that the start date for the EDMP cannot depend on the grant agreement. “There is an acute problem that needs to be solved immediately,” they said.

According to litigants, government does not have to depend on the World Bank for the $6 million required for fire suppression. Apart from that, the smoking and stench problems at the dump were already there before Hurricane Irma struck the island in September 2017.

During the hearing of the injunction it was said on behalf of the Minister of VROMI that the fire-suppression project could be finalised by June/July 2019, but in the roadmap it was stated that the project would require 14 months after the grant agreement has been signed.

Litigants stated in their response to the Court that they have little confidence that government would meet deadlines, as there are also concerns about the termination of the current dump management agreement as per December 31, 2018.

A tender for a new manager, which was to be published on the government website as per October 31, has not started yet, the lawyers said Friday.

Litigants wonder what has been done since the injunction was filed pertaining to the voluntary or involuntary evacuation of squatters on the landfill. Government has stated in the roadmap that any start date for a dumpsite project depends on clearing the area from squatters. This would be a World Bank requirement, for which a Social and Environmental Safeguards Plan should be finalised by the end of December.
According to litigants, drafting the plan would take five months and would only start one month after the grant agreement has been signed, which is deemed “unacceptable.”

The roadmap also includes measures to prevent nuisance for local residents in connection with fire-suppression activities.
“It goes without saying that local residents must be informed when there is to be expected nuisance … and that measures are taken to limit the nuisance, but it is hard to see why a five-month investigation should be carried out on this,” the lawyers said.

World Bank expert Todd Thalhamer, who was hired to advise the government on the landfill fires, had stated that the fires at the temporary smaller “Irma” landfill could be stopped in five weeks and those at the larger dumpsite within five months, litigants pointed out.

Following an article in de Volkskrant newspaper of November 4 in which it was stated that Country St. Maarten was familiar with the results of the EE&G investigation and report but were holding these back, Prime Minister Leona Romeo-Marlin and Minister of Public Health, Social Development and Labour Emil Lee said a few days later that they were familiar with the report but that it was not yet finalised.

“Furthermore, the report would be World Bank property and Country St. Maarten does not seem willing to make it public,” the two lawyers said, adding that efforts to obtain a copy of the report from the World Bank or EE&G has not yielded any results. Therefore, litigants maintain their claim for an independent investigation into the exact harmfulness of the emission of smoke, gasses and odour, they said.

Because they are “far from pleased” with the roadmap’s content, litigants call on the Judge to schedule a Court hearing for November 23, when the second progress report is due. Litigants announced that they would ask for a verdict in case Country St. Maarten were to announce more delays in the signing of the grant agreement.