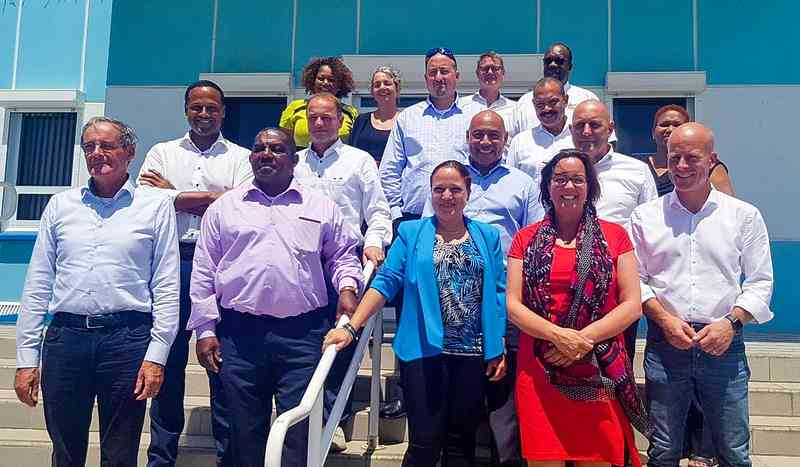 SABA/ST. EUSTATIUS–The Dutch Cabinet has set a benchmark for a social minimum in the Caribbean Netherlands. The indicative amount for a single person has been set at approximately US $945 a month in Bonaire, $1,056 in St. Eustatius and $1,077 in Saba.

To reach this amount, the incomes of residents in the Caribbean Netherlands must increase and the cost of living must come down. The Dutch Cabinet started this process last year and the first measures have already taken effect, State Secretary of Social Affairs and Employment SZW Tamara van Ark wrote in a letter to the Dutch Parliament’s Second Chamber. Van Ark also announced in her letter that she would further increase the minimum wage and child benefits as of 2020.

Van Ark, together with coordinating State Secretary of Home Affairs and Kingdom Relations BZK Raymond Knops, held consultations in Statia on Thursday with the public entities on the measures necessary to balance the incomes and the cost of living in establishing a social minimum.

“This is an important step to improve the situation of the inhabitants on the islands. There is poverty and cost of living is expensive. We are going to tackle that with new, targeted measures. Some measures we can implement quickly, others will take longer. Throughout the Dutch cabinet there is the willingness to take the steps that are required to develop a social minimum. There is also a task for the governments of Bonaire, Saba and St. Eustatius for this,” Van Ark stated.

In the coalition agreement the Dutch government indicated that priority will be given to improving the islands’ economic prospects by strengthening the infrastructure and the reduction of poverty, among other measures.

The Ministry of Social Affairs and Employment SZW increased the statutory minimum wage, child benefits and social relief for people who live alone from January 1, 2019. The employers’ contributions were reduced from that date, which allowed employers to increase wages.

Starting this year, more people are also eligible for special assistance. Measures were also announced for people who cannot work. The assistance for the disabled will be increased as of January 1, 2020, and a surcharge for single recipients of old age AOV pensions will be introduced via social relief. In addition, steps will be taken to strengthen the quality and accessibility of childcare and employment mediation.

With new measures the Dutch cabinet aims to increase the income of workers and households in the direction of the benchmark. Therefore, SZW will increase the minimum wage in Bonaire by five per cent and by two per cent in Saba and Statia, as of January 1, 2020. As a result, the social benefits will rise as well.

Parents in Bonaire will receive approximately $82 per child per month in 2020, and in Statia and Saba $84 per month.

For many people in the Caribbean Netherlands the cost of basic expenditures is too high at this moment. The cost of living should be reduced to a reasonable level and the Dutch government said it is committed to bring these fixed costs down.

Where housing is concerned this means more social housing and rent regulation. The Ministry of BZK will be taking steps in this direction.

The Ministry of Infrastructure and Water Management is making subsidy available to keep the price of drinking water affordable. The Ministry of Economic Affairs and Climate Policy is reviewing the Telecom Law and regulations to improve service and to reduce cost.

“The cost of living is different on each island. Therefore, we consulted with representatives of Bonaire, Saba and St. Eustatius to identify the correct prices of items and the best way to bring these down. Jointly, we want to choose the best solutions to decrease the cost of living for people and to increase their income,” Van Ark said.