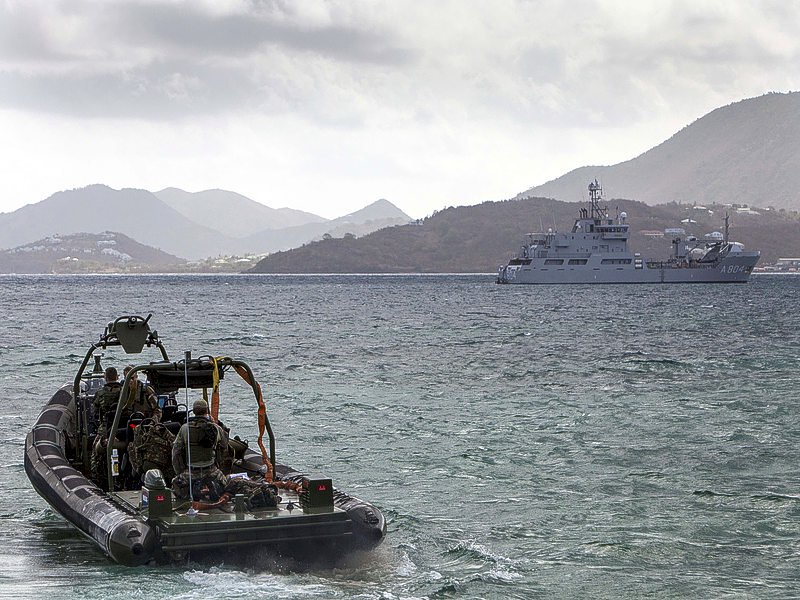 Yesterday military of the Dutch Defense in the Caribbean have left from both Curacao and Aruba to support local authorities of Saint Martin, Saba and Statia (SSS Islands) in their preparations for hurricane Irma.

Hurricane Irma is a hurricane with a force of 5 and rides towards the Leewards Island. It is expected that these islands will be seriously damaged when Irma passes this Wednesday morning. The islands are taking into account stormy winds, a lot of rainfall and local floods. Due to the vulnerable infrastructure on these islands, this is where most damage is expected after Irma passes. As a precaution, the local authorities of the SSS Islands have requested additional assistance from the Dutch military in the Caribbean.

loading of supplies on board HNLMS Zeeland on Aruba

Divided over two flights, the first units arrived at Saint Martin Monday afternoon. The boots on the ground come from  the 32nd Raiding Squadron of the Royal Netherlands Marine Corps (RNLMC) stationed at Aruba, complemented by militia of Aruba. From Sint Maarten this unit have been divided over the three islands. Their task is to support local authorities with preparations for hurricane Irma. Tasks vary from manning shelters to supporting local police in maintaining the curfew.

After Irma has passed HNLMS Zeeland and HNLMS Pelikaan will arrive in the area. They support with personnel and materials from Aruba (Zeeland) and Curacao (Pelikaan). Curacao stationed Infantry Company and Curacao militia forces will be on board HNLMS Pelikaan. The units, can provide assistance with the damage assessment and they can help restore the infrastructure when en where necessary.

The Pelikaan is the support ship of the Commander Netherlands Caribbean Forces with strategic transport capabilities. It has the ability to transfer 77 persons in total including a 15 headed crew. The Zeeland is a Holland-class patrol ship. She has a helicopter (NH90) and two fast interceptors on board (FRISC: the Fast Raiding Interception Special forces Craft) that can be used as personnel and equipment ashore. In addition, the ship has storage space for containers with auxiliary goods and there is a crane on board. There is also room for boarding around 100 evacuees.

Supporting civil and local authorities is one of the three main areas of Defense in the Caribbean. Support prior, during and after hurricane passages is one in particular. The last time units were deployed was on the island of Haiti after the passage of Hurricane Matthew in October 2016. Both ships (including helicopter) and the military boots on the ground will provide support on the SSS Islands for at least one week as of yesterday.