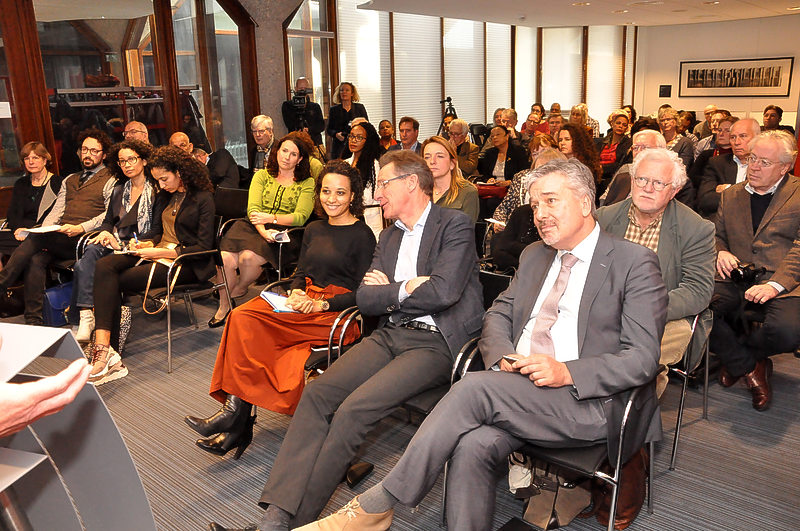 LEIDEN–The Dutch Caribbean Digital Platform of the Leiden University and the University of Curaçao with more than half a million scans that were made of old books, magazines, articles, manuscripts, newspapers, photos, maps and charts went online on Saturday.

With only a mouse click away, people throughout the Dutch Kingdom and the world can now read, analyse and print the combined digital Dutch Caribbean collections up to the year 1954 of the Royal Netherlands Institute for Southeast Asian and Caribbean Studies KITLV, the Royal Netherlands Institute for the Tropics KIT and the Leiden University Libraries.
These historic, fragile and highly important collections, together with the digitalised archive of the University of Curaçao, are now accessible for the larger public for study purposes. The digital portal was presented during a symposium on Saturday at the Leiden University and also at the University of Curaçao where Dutch Minister of Education, Culture and Science Jet Bussemaker did the official launching.
The Dutch Caribbean digital heritage project, made possible through a subsidy of the Dutch Ministry of Education, Culture and Science OCW, was an extensive endeavour that involved the sorting and selecting of a whole lot of material of which some pieces were very fragile because they are very old.
Project Leader Innovation and Projects of the Leiden University Dr. Saskia van Bergen mentioned a few figures in her presentation during the symposium in Leiden: 2,600 book titles, 11,000 articles, 450 magazines, 300 manuscripts were meticulously scanned by a professional company in Lisse, the Netherlands.
This exercise produced a total of 546,000 scans of which 380,000 are from books, magazines and articles, 80,000 scans from the collections of the KITLV, the KIT which has been stored at the KITLV since its closure, University of Curaçao and the Leiden University Libraries, 14,000 archive pieces.
Also 47,000 scans were made of the Amigoe newspaper from before 1954. The latter newspaper is stored at the Royal Netherlands Library in The Hague. The “Koninklijke Bibliotheek” also made its Hamelberg collection available, a unique set of antique books and of mostly handwritten and typed documents by Johannes Hamelberg (1862-1918), a Dutch civil servant who worked in Curaçao and St. Eustatius.
Not all of the documents on the website are available for a wider public. That has to do with the author’s copy rights resting on some of the publications, explained Van Bergen. She said that the clearing of copy rights was an ongoing process to make more documents widely available. Most documents are in the Dutch language, but there are also English and Papiamentu pieces.

Great step
“A great step to give the Dutch Caribbean heritage collection more international exposure,” said Director of the Leiden University Libraries Kurt de Belder. “This opens the door for everyone who is interested in the history of the islands.”
KITLV Director Professor Dr. Gert Oostindie, a speaker at Saturday’s symposium, referred to the Dutch Caribbean digital heritage collection as “unique.” “This is highly important for the current and future generations. Cultural heritage is hot. It is an anchor because it provides a grip on the past, how people thought and acted in past times. It is also a beacon because it forces us to reflect on the past,” he said.
Oostindie pointed out that the history of the islands was mostly colonial since the arrival of Christopher Columbus, and that it included dark parts of the slavery past. “We need archive collections in order to learn and better understand the history of the trans-Atlantic Kingdom.”
Oostindie praised the initiative, but said it would be even more valuable to add other collections, some of them private, as well as the Suriname material. He also made a case to digitalise the archives after 1954. “It is strange that we stop at 1954 because there is so much material after that.”

Queen Máxima
Towards the end of the symposium, during the live, simultaneous transmission with Curaçao, Oostindie read a short statement from Queen Máxima, the patron of the KITLV. She stated that the colonial times, the shared history of the Kingdom had “good, but also bitter experiences.”
“It is a good thing that this information becomes available. Everyone can now search in the treasure chamber of our shared history,” Queen Máxima stated. Minister Bussemaker agreed that the Dutch Caribbean digital heritage collection was “very valuable” for the shared history. “It can become the history of now, create renewed interest,” said Bussemaker from Curaçao. She hoped this would stimulate teachers to include the digital platform in their class.
The vast majority of the archive material is stored in the Netherlands, mostly in Leiden. This meant that until now people from the islands who wanted to research the history of the Dutch Caribbean had to come to the Netherlands. For people from the Windward Islands, this was even worse.

Windward Islands
As very little archive material is stored on these islands, researchers had to go to Curaçao and to the Netherlands, said KITLV researcher and lecturer at the Leiden University Dr. Jessica Roitman who has done extensive research in the Windward Islands as part of the larger, multi-disciplinary, multi-annual Confronting Caribbean Challenges project.
The Windward Islands play a marginal role in the Dutch Caribbean colonial history, with the big focus having been on Curaçao. “Unfortunately the islands were a bit forgotten, and if the Windward Islands were mentioned, it was almost always St. Eustatius in its glorious Golden Rock times. I want to give these islands more attention,” said Roitman.
“It is important to have these collections digitalised, not only for researchers, but especially for everyone else who want to learn more about his or her own past, right from behind the computer,” said Roitman, who specifically mentioned the Hamelberg collection which includes information on the Windward Islands.
Roitman’s colleague, KITLV researcher Stacey Mac Donald who also works on the Confronting Caribbean Challenges, addressed the issue of identity during the panel discussion. She said that the digitalisation of this collection was also very important for the youth.

Own identity
Mac Donald remarked that schools on the islands generally taught too little on the slavery past and colonial times, and that the learning material too was limited. “With the Dutch Caribbean digital heritage now online, these youngsters can find out more about their past in search of their own identity.”
Researcher specialised in social diversity, heritage and the slavery past Dr. Valika Smeulders, who also organises heritage tours in the Netherlands with “Pasado Presente,” spoke about the slavery times in Bonaire, a topic that she researched.
Slavery was very different in Bonaire than in Curaçao, said the Curaçao-born Smeulders. Bonaire had a state plantation, run by the West India Company (WIC), and not multiple plantations as in Curaçao.
The slaves in Bonaire had to work excessively hard and carry heavy loads. The very hard working conditions, combined with the great lack of food, resulted in many injuries, some permanent, and much illness. This left many unable to work, which caused people to say that the workers in Bonaire were lazy.
Smeulders said there was much information to be found in the digital collection. Information which she hoped would contribute to putting historical events in a better perspective and creating a broader human interest angle.

Slave trade
Professor Dr. Henk den Heijer of Leiden University, specialised in maritime history, said the digital collection was “very important” for research about the slave trade between West Africa and the Caribbean in the 17th and 18th centuries.
Even though the Netherlands had a limited role in the slave trade with a mere five per cent in the total trade of 12 million people who were transported out of Africa, the Dutch dominated the trade at the coast of West Africa for almost 200 years.
The archives contain a very important report of Jan Valckenburgh, the director who ran the Dutch slave trading centre Fort Elmina, located in the current Ghana, for almost ten years in the most prosperous times of the slave trade. Den Heijer said Valckenburgh’s report of 1659 provides very detailed information on the trade. Den Heijer said there were several other important manuscripts that gave a good overview of the Dutch slave trade.
The digital collections are available via the Dutch Caribbean Digital Platform, dcdp.uoc.cw, and also on the Digital Library of the Caribbean, dloc.com, where the University of Curaçao and Leiden University have been added as a partner collection. In the near future, the collections will also be available at the new platform of the digital collections of the Leiden University Library.