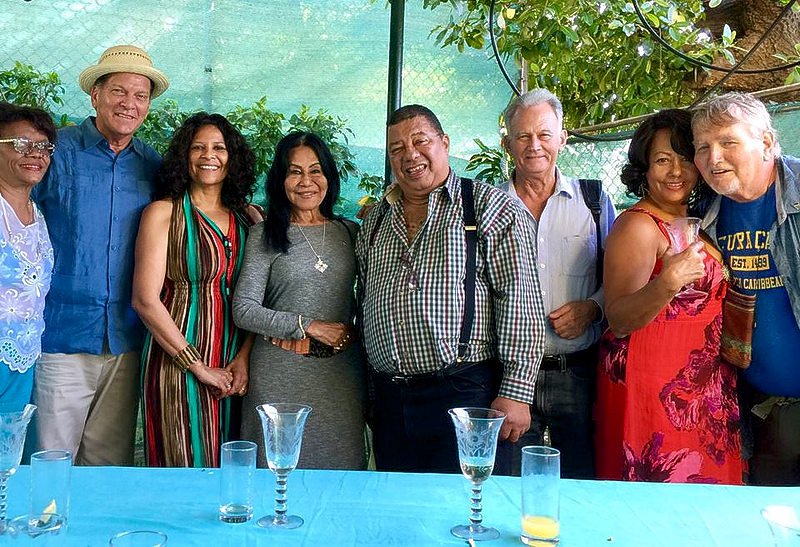 From left: Aruban-Spanish scholar Mirto Laclé and his wife, authors Loekie Morales and Diana Lebacs, consul of the Dominican Republic Pedro Ureña Rib, librarian/researcher Emilio Rodriguez, author Leo Regals and his wife at the consul’s residence in Havana, Cuba, during the 26th edition of the Feria de los Libros.

HAVANA–Dutch Caribbean authors made an impression during the 26th edition of the Feria de los Libros. The international book festival took place in Havana, Cuba, February 9 to 19.

Publishers, writers, proof readers, layout artists, printers and distributors from the Caribbean and Latin America, but also from Europe indulged in many booths at the La Cabaña festival site.

In addition, there were several lectures on literature at many locations in Havana, including Casa de Las Américas, which holds one of the largest collection of books by Caribbean and Latin-American authors.

St. Maarten was represented at the Festival by author and Director of Beyond Kultura Events Foundation Loekie Morales, who said the Festival was “great for sharing and exchanging literary experiences and the cultural aspects of publishing, illustrators and readers.”

Morales and her colleague-author Diana Lebacs were invited to attend the festivities and give lectures about their work in Casa de Las Americas. They were introduced by librarian and researcher of the Dutch Caribbean’s literary world Emilio Rodríguez. He is writing an encyclopaedia containing 100 biographies of authors of the former Netherlands Antilles.

The lectures in Casa de las Américas was also attended by Aruban-Spanish scholar Mirto Laclé. After the lectures, consul of the Dominican Republic in Havana Pedro Ureña Rib invited the Dutch-Caribbean guests to dinner at his house. Ureña Rib has family ties with Curaçao through his father. The host and his guests talked about Latin-American and Caribbean art, literature, dance, folklore, history and contemporary news.

“We are determined to continue to promote and encourage reading in the Caribbean. We will produce more books with stories that the Caribbean child can identify with. Important for this year is to support Rodríguez with the creation of the Dutch-Caribbean authors’ encyclopaedia,” said Morales.