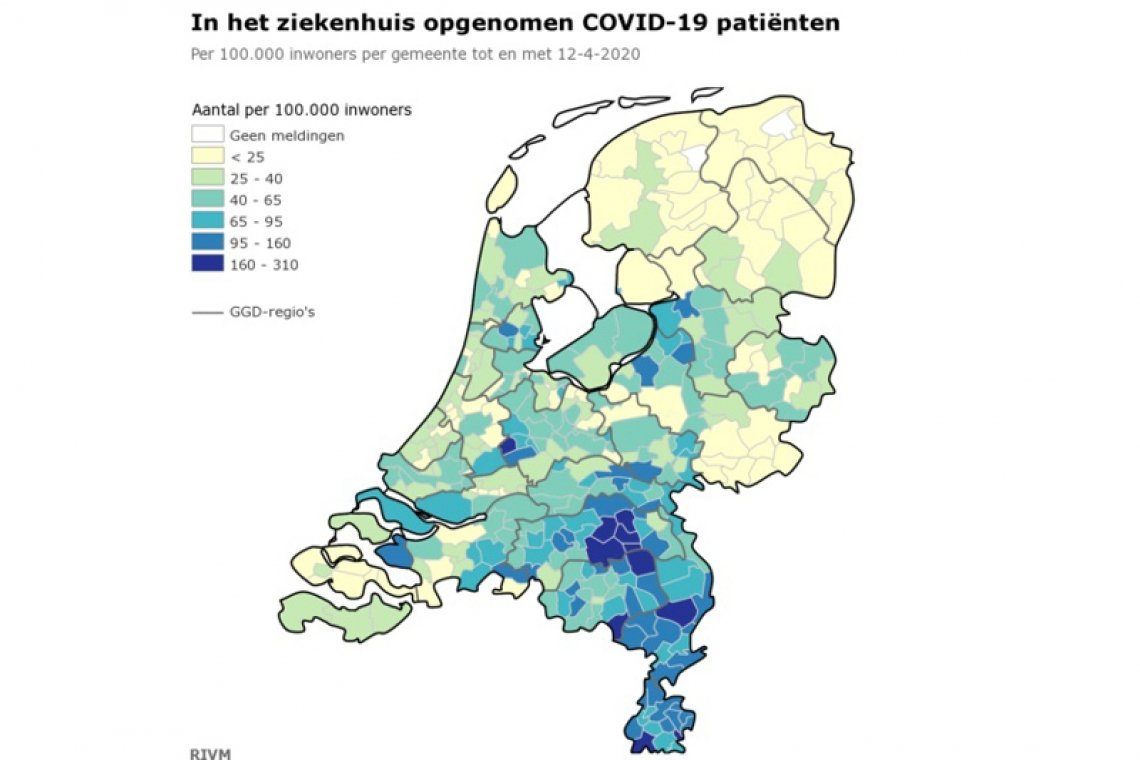 Hospitalised coronavirus patients in the Netherlands per 100,000 residents up until and including Sunday, April 12, 2020. (RIVM graphics)

AMSTERDAM–The official coronavirus death toll in the Netherlands increased by 94 overnight, the lowest figure in two weeks, according to the Sunday update by National Institute for Public Health and the Environment RIVM.

The real weekend death toll is likely to be higher because some registered deaths have not yet been included in the total, the RIVM said. Nevertheless, the Sunday increase takes the official number of coronavirus-related deaths in the Netherlands to 2,737.

The number of people in hospital rose by 196 to 8,582, well down on the 244-average recorded over the past seven days. The official number of positive coronavirus tests increased to 25,587, but the true number of infections is far higher.

Last week, the Dutch testing programme was expanded to cover health-service workers who do not work in hospitals. Healthcare workers now account for 39 per cent of new cases, the RIVM said.

Meanwhile, RTL News reported that cabinet ministers have started working on plans to relax the Dutch “intelligent lock-down” after April 28. The broadcaster based its claim on leaked minutes of a meeting of senior civil servants.

Schools and childcare centres are the top priorities to be re-opened, after that restaurants, cinemas and gyms could also be gradually opened up, the report said.

However, the measures depend on sufficient progress being made in cutting back the spread of coronavirus and on the advice of the government’s experts, the broadcaster said.

The Dutch government has pledged to announce if the lock-down will continue past April 28, – and the May holiday in the case of schools -, by April 21.

The minutes also show progress is being made on the government’s plans to use an app to track and trace sources of coronavirus. Legislation is being drafted to make it easier to share information and the Dutch privacy watchdog has also been consulted, RTL News said.

The government has also asked companies and experts to “think about” the development of an app and has set Tuesday, April 14 as the deadline for suggestions. The government said last week that apps will have a key role in relaxing social-distancing rules.