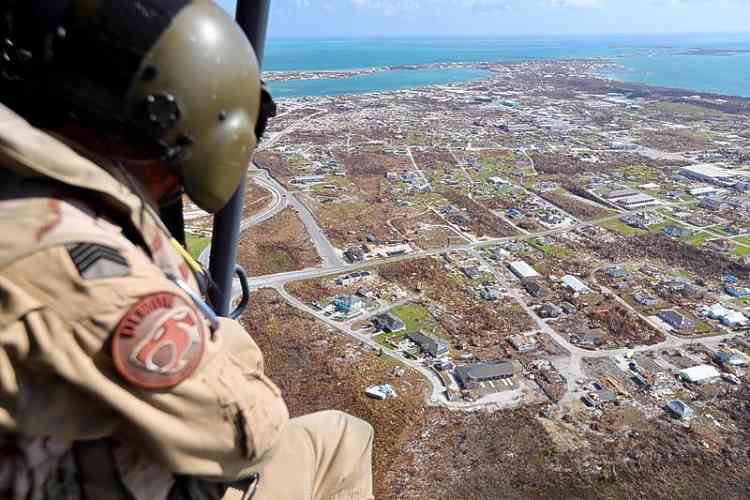 The view of Abaco from one of the Dutch Defence helicopters. (Ministry of Defence photo)

THE HAGUE–Some 550 Defence personnel of the Royal Netherlands Navy, Marines, Air Force and Marechaussee have arrived in the Bahamas to provide emergency assistance to the people on Abaco, one of the islands that was hardest hit by Hurricane Dorian on September 1 and 2.

A first group of some 20 military personnel was put on land with transport helicopters from HMS Johan de Witt on Wednesday afternoon. The group made contact with local authorities, international relief organisations and crew members of the Dutch Navy ship HMS Snellius which had arrived on Wednesday morning.

The first priority was to map the situation on Abaco. For this reason, some crew members were dispatched ahead by helicopter to inspect the hospital and the harbour, and to determine where assistance of the people is most needed.

“The first day is about coordination,” said Commander Ad van de Sande in a Ministry of Defence press release. He explained that aside from the reconnaissance by helicopter, the crews of the two ships were busy getting manpower and relief goods on land. “That is what we will be doing in the coming days.”

Besides the deployment of personnel, material will be dispatched. As amphibious transport ship, HMS Johan de Witt can bring goods to shore with landing vessels. As a hydrographic observation vessel, HMS Snellius can map underwater damage and other blockades in Abaco’s harbour so it can again become accessible.
On board the two Dutch Navy ships are vehicles to transport relief goods on the island, including construction material for emergency repairs and pallets with water and food. The Marines’ Cougar transport helicopters are also highly functional to quickly bring relief goods to shore.
Dutch Defence is assisting at the request of the Bahamian government. Caribbean Disaster Emergency Management Agency (CDEMA) and Red Cross International are coordinating the emergency assistance.