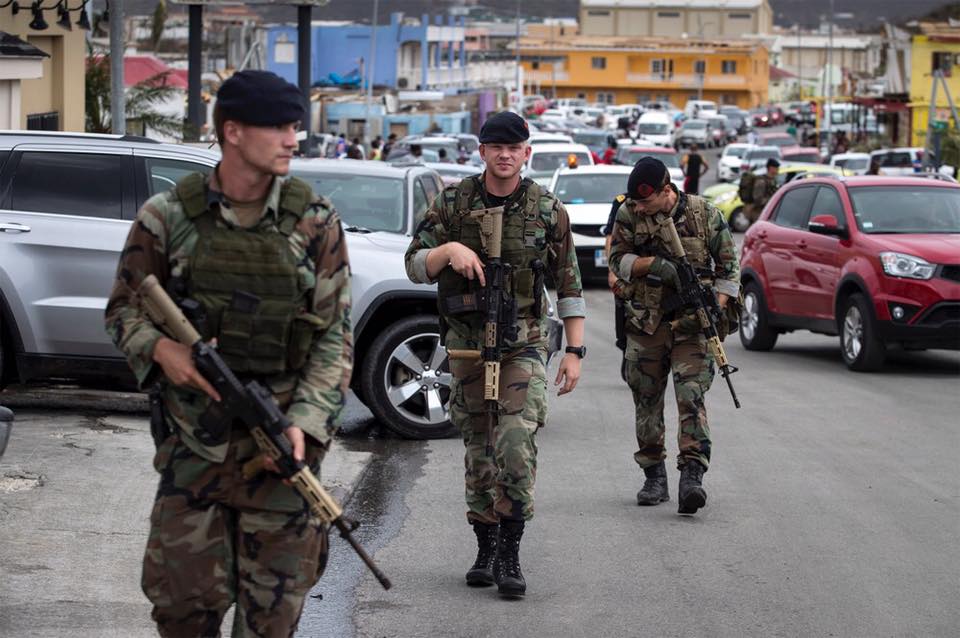 THE HAGUE/PHILIPSBURG–Now that the impact of Hurricane José seems to have been limited, Dutch Defence personnel can continue in full force with the work of recovery and clearing of debris, with the assistance of a special engineers’ unit of the Marines.

A large-scale distribution of food and water will start today, Sunday. The people will be informed. Once airlift has resumed, the C-130 of the Royal Air Force will transport more relief goods from Curaçao to St. Maarten, and more patients and other urgent cases will be evacuated.
After the evacuation of acute patients and badly affected families of deployed Defence personnel, police officers and emergency workers, the priority will shift to the transport of Dutch tourists off island. Tourists were asked not to come to the airport, but to wait when they receive word that they have been cleared for departure. Masses at the airport can hinder the progress of the evacuations.
On Friday night, the patrol ship His Majesty Zeeland was forced to return to sea again. The upcoming passage of hurricane José had posed too much risk of damage to the ship. The Zeeland went to Saba and St. Eustatius to bring water and food supplies, as these islands were running low on these essentials. The navy ship returned to St. Maarten on Sunday morning, promptly after the passage of José.
The transport ship His Majesty Pelikaan went back to Curaçao earlier this week to pick up more relief supplies, and will arrive in St. Maarten Sunday evening. The Dutch Caribbean Coast Guard cutter Poema has picked up water bins in St. Kitts and transported these to St. Maarten. The Poema crew will assist with the reconstruction at the Coast Guard station in Simpson Bay.
The Royal Netherlands Navy is working very hard, together with the Dutch Army, Air Force, the Royal Marechaussee and Dutch Caribbean Coast Guard. They support in maintaining public order, provide emergency assistance where possible and evacuate wounded.
At the beginning of this week, Zeeland steamed towards the Windward Islands. After the passage of hurricane Irma, Van der Kamp immediately sent his NH-90 board helicopter on exploration. Where was help needed? The answer was as simple as shocking: everywhere. On the ground, they assist local authorities in maintaining public order. Not a simple assignment, so it turned out quickly.
The Zeeland and Pelikaan participated on Thursday to bring all auxiliaries to land. “At the same time, we have sent people out to make the airport’s landing strip clean together,” said Commander Captain Lieutenant at Sea André Van der Kamp. “One day later, we supported the port authorities with the partial accessibility of the port. The ravage there is also huge.”
Van der Kamp’s hands are itching to resume help on St. Maarten. “Sunday, I want to moor at the first light. The Zeeland is ready to go again. Our mission will start again from the beginning: to get an overview of the additional damage and to support local authorities.”
On Saturday, an additional 100 soldiers were flown in. They can assist local authorities in maintaining public order. “As far as maritime aid groups are concerned, we will stay for as long as necessary in this area,” said Van der Kamp. “And in the meanwhile, in the Netherlands we are thinking hard about how to free up more capacities.” He said that Defence was providing emergency assistance at the moment, but that “a lot has to be done” after this initial phase.
The security situation has been improving, but some looting and robbery incidents unfortunately were still occurring. The patrols are doing everything in their power to stop these incidents, and they appear to be effective in preventing or stopping looting and robberies. Patrols have the full mandate to act harshly, with force, if necessary.
The Pointe Blanche prison is now fully guarded by Dutch militaries, confirmed Defence. Earlier rumours and reports that inmates have escaped are unfounded and not true, it was emphasized.
King Willem-Alexander and Minister of Home Affairs and Kingdom Relations Ronald Plasterk have left for Curaçao. There, they will be meet Governor Lucille George-Wout and Prime Minister Eugene Rhuggenaath, visit the Emergency Operations Centre where they will be updated on the emergency relief operation in St. Maarten.
The King and the Minister will visit the patients and victims from St. Maarten who are staying at Curaçao’s Sint Elisabeth Hospital after their evacuation. The King and the Minister will go to the Windward Islands if this possible. The King has shown great empathy for the people in St. Maarten, but he does not want to be an obstruction for the emergency relief efforts which are top priority.