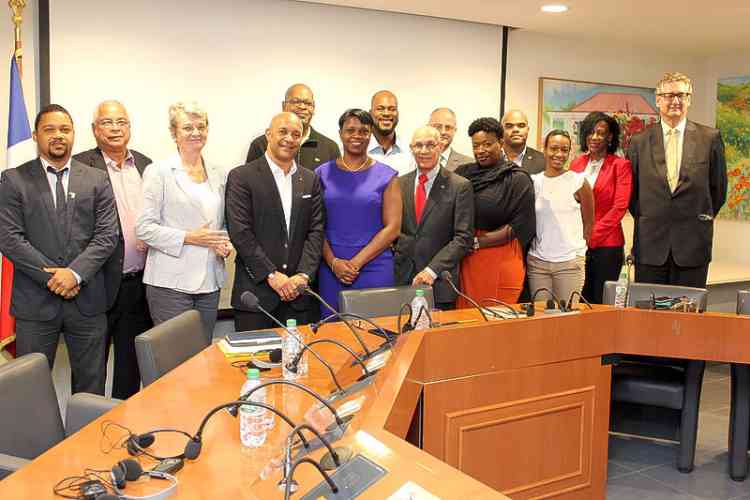 MARIGOT–Prime Minister Leona Romeo-Marlin has started to put into action her promise to rekindle and strengthen Dutch-side/French-side cooperation. She led a delegation to Marigot on Sunday to meet Préfète Anne Laubies and President of the Collectivité of Saint Martin Daniel Gibbs, ending some 14 months of no governmental contact or cooperation.

The breaking of ties came under the former National Alliance (NA)-led government and stemmed from issues related to the still-to-be-demarcated border in Oyster Bay and the legal standing of Captain Oliver’s Restaurant and Marina.

The process of reversing the possible risk of jeopardising the continuation of important European Union (EU)-funded joint projects, essential and beneficial to the people of both sides of the island, was top of the agenda.

The goal of Sunday’s meeting, according to the Prime Minister’s Cabinet, was to reaffirm both sides’ commitment to the St. Martin/St. Maarten Territorial Cooperation Programme 2014-2020. A progression update on three existing projects – Belle Plaine drainage project, Simpson Bay Lagoon clean-up and a wastewater treatment plant in Simpson Bay/Cole Bay – were discussed at the meeting.

A waste-to-energy solution for the sanitary landfill/dump was also discussed as a possible fourth project. Those discussions are described as “preliminary and exploratory in nature.” Both sides still require more research and development before formulating any proposal.
Government representatives on both sides expressed the need for a unified message in discussions with the Netherlands and France.

The reps also believe cooperation on a local level must continue on a structural basis, said the Cabinet. The “historical unity and cooperation that has been displayed for many years must continue to be an example for countries in the world to recognise and admire.”
Accompanying Romeo-Marlin to the French side were Finance Minister Michael Ferrier, Justice Minister Cornelius de Weever, and Environment and Infrastructure Minister Miklos Giterson. Both sides had their teams of technocrats in the meeting.