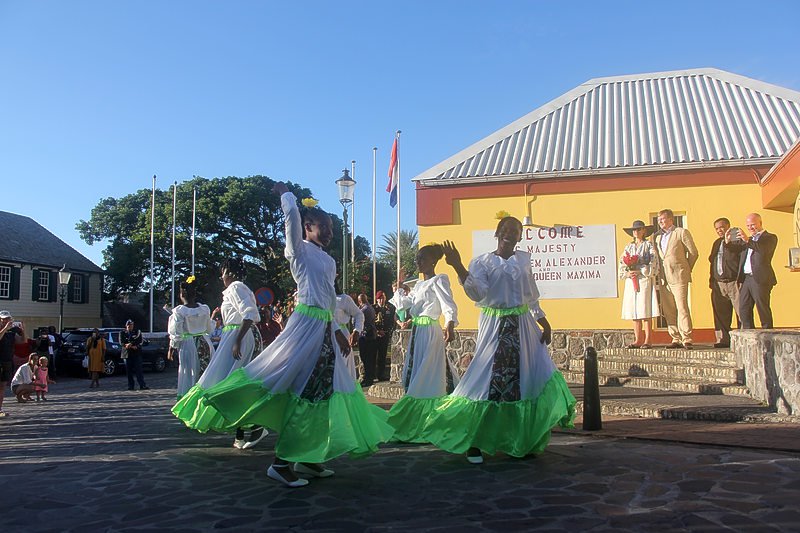 The King and his delegation also visited the island on September 13 to witness the devastation left behind by Irma. Yesterday, the King and Queen, accompanied by new State Secretary of Home Affairs and Kingdom Relations Raymond Knops, visited a home that was totally destroyed by the hurricane.
The royal delegation arrived at F.D. Roosevelt Airport at 2:55pm, where they were welcomed by Acting Island Governor Julian Woodley and Commissioner Derrick Simmons. Junior Carnival Queen Statia Cathryn Sanchez presented the Queen with a bouquet of flowers.
A large crowd lined the Airport fence and the terminal building. Loud cheers went up as the royal couple emerged from the Winair airplane and again when they came out of the Airport terminal building.
After the welcoming rituals, the royal train immediately headed for the brand-new solar park, which provides the island with electricity roughly between 8:00am and 8:00pm.
St. Eustatius Utility Company Stuco Chief Executive Officer Fred Cuvalay gave the King and Queen a tour of the facility, which includes a number of batteries to store the energy provided by the large number of solar panels.
In total, 62 homes sustained hurricane-related damage, Lions Club Treasurer Siem Dijkshoorn explained to the royal visitors. The Lions Club, in conjunction with the Dutch Government, the Island Government and the Reconstruction Team, provides assistance to hurricane victims.
The royal couple made a stop to visit the residence of Sylvina Simmons on Mansionweg. Her home was completely demolished by the passing hurricane. Fortunately for her, she was not at home when the storm passed, as she had taken up shelter elsewhere.
The King and Queen met with representatives of St. Eustatius Care Centre, Sports Association, Mega D Youth Foundation and The Green House Project at Gertrude Judson Bicentennial Public Library.
Many people gathered outside the Library at the heart of Oranjestad to catch a glimpse of the royal visitors as they enjoyed an outdoor performance by Aloei Dancers in the street. One of the youngest dancers, Jayden-Leigh Glover, presented a gift to the royal couple.
The King and Queen then left for the Airport, where they were entertained by Gwendoline van Putten School’s GVP Angels.
The royals then said their goodbyes to the Statia officials and started to board their flight. Just before the Queen was to step into the waiting aircraft the GVP Angels called out to her. The Queen turned around to the young performers who were gesturing the sign of “Raising the roof,” which the Queen returned. The Angels welcomed the response with applause and cheers.
After spending no more than an hour and a half in Statia, King Willem-Alexander and Queen Máxima left again for Saba. Despite the brevity of their visit, many persons in Statia said they were happy and excited that the royal couple had visited their island.
Today, Friday, the King and Queen will be attending the Saba Day celebrations, which will commence with the traditional service at Christ Church in The Bottom, starting at 8:30am.