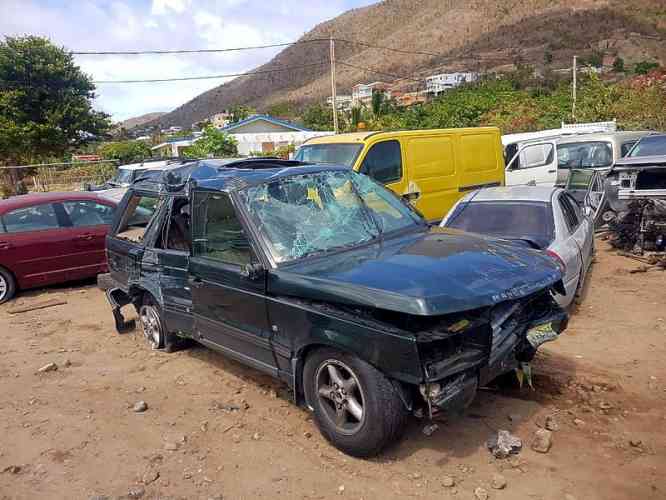 The Range Rover involved in an accident in April this year. The vehicle was driven by a Marine who was under the influence of alcohol.

PHILIPSBURG–St. Maarten resident Patricia Lynch was driving her white Mazda CRX in April this year on Link One Road Cole Bay Hill when a Range Rover slammed into her vehicle causing severe damage to both vehicles. When police arrived on scene, it was discovered that the driver of the Range Rover was a member of the Dutch Marines and he appeared to be under influence of alcohol.

Lynch was transported to the St. Maarten Medical Center for treatment. The marine was checked by ambulance officials and was arrested. The case went cold after the marine was sent back to the Netherlands and no official statement was made by the local Prosecutor’s Office or the Marines about the incident.

Outcry of injustice on social media by members of the community since the incident occurred caused the Ministry of Defence in the Netherlands to issue a statement about the accident on Friday.

“The Ministry of Defence received reports that they have sent a marine who was drunk and caused a car accident back to the Netherlands without any prosecution. This message is incorrect. With this statement the Ministry of Defence would like to explain the situation in regard to the prosecution of military personnel in general and the marine in this specific case.

“Let us make one thing clear: in no way do we set out to protect military personnel from being prosecuted for acts they wrongfully commit. It is up to the Public Ministry where the individual military person will be tried, either on one of the islands of the Kingdom or before the military Chamber of the Court in the Netherlands.

“The public prosecution in all of these countries is autonomous and repatriation of military personnel to the Netherlands will always take place in coordination with the local authorities. In any case, they will be tried and held responsible for their acts.

“Irrespective of the outcome of the penal law procedure, the Defence organisation often undertakes additional measures to hold an individual responsible. Some examples of this are suspension, repatriation and/or possibly even forced resignation,” according to the statement by the ministry.

“In general, a military member of the armed forces thus suffers severe consequences for their actions committed overseas in either one of the autonomous islands, and will undergo trial in either part of the Kingdom under the same laws and circumstances.

“It so happens to also be the case with the case referred to above, where a marine was involved in an accident and was under influence of alcohol. The Defence organisation highly disapproves of such behaviour. Therefore, the Ministry of Defence has undertaken to suspend and repatriate this specific marine to the Netherlands, where he is currently awaiting prosecution.”

The Daily Herald contacted Defence Ministry spokeswoman in the Caribbean for the Royal Navy Canan Babayigit on Friday afternoon and requested clarity on their statement. When asked to say how the military was sure that their fellow member was under the influence of alcohol, she said: “A blood-test was executed on the marine and the outcome was that he did not use drugs, but he had alcohol in his blood.”

She was asked whether the marine has been officially charged for a crime. “Other than suspend and repatriate him, he has not been charged yet. End of this month, there will be a so-called Oversight Commission hearing and for now I don’t know a date for his trial,” Babayigit stated.