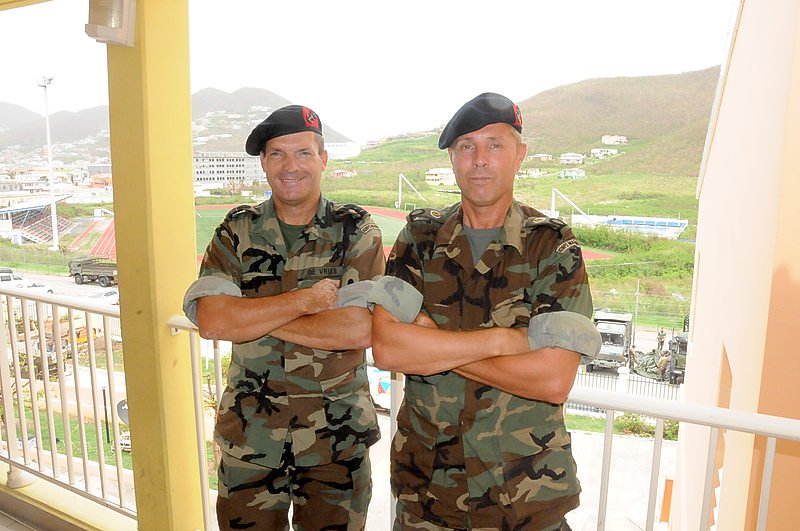 CAY HILL–“We are only here to help and get back the island on its feet,” said Lieutenant Harro de Vries, who is in charge of the Royal Dutch Marines in St. Maarten, on Tuesday. The present mandate of the unit of military personnel is to assist local authorities in maintaining public order and to provide support where needed.

The relationship with the Police Force is “excellent,” according to De Vries. He said relations had gotten better pre-Hurricane Maria. “We got very close as we conducted daily meetings with them and the cooperation is still ongoing,” said De Vries.
There is also some cooperation with French-side military forces, but it is more on a local governmental level, according to De Vries. “I did meet with the French-side commander and permission is given to them as they arrive at the Dutch-side airport and travel to the French side when arriving on the island. He said they respect the border and that is it.
Princess Juliana International Airport SXM is still being guarded by the Marines and is classified as an “Uncontrolled Airport.” There is no functional beacon and radar system.
“We are guiding emergency flights in the country, but the responsibility of all aircraft that come to St. Maarten is the responsibility of the airline company. The airport is not operational yet. For now, only emergency flights come into the island. Civilians and Marine specialists continue to guide flights on a daily basis,” stated De Vries.
The Marines also assisted with relief goods that came into the island just after Hurricane Irma destroyed most of the island. “We were asked to assist with distribution and we did that, but the relief goods are the responsibility of the different groups that the goods were sent to,” he added.

Relief goods
The Daily Herald asked De Vries whether there are enough relief goods at the airport for those in need on the island. “I don’t know about the Port supplies but at the Airport ‘no,’” he said, but he reiterated that relief goods are not the Marines’ responsibility.
“We do assist groups that request the assistance of the Marines to keep the peace while items are being distributed. There are different types of Marines on island, those who are involved with safety and security and engineers who as assist with rebuilding of structures where they are needed,” said De Vries.

Looting
The security situation has been improving, but looting/robbery incidents were the talk of the town just after Hurricane Irma. “I was not on the island yet when this was taking place but I am sure that the team that was stationed here did everything in their power to stop it. It is a sensitive issue, but Marines get mandates and based on the mandate we receive we act on the orders,” stated De Vries.
After the passing of Hurricane Irma, patrols did everything in their power to stop these incidents and seemed to be effective in preventing or stopping looting and robberies. Patrols had the full mandate to act harshly, with force if necessary. The Pointe Blanche prison is still being guarded by five Marines with support from prison guards.
The mandate now for Marines is to uphold the curfew on request of the St. Maarten Government and guard vital places such as banks, hardware stores, power plants and water production facilities. Accommodations for close to 600 marines and Defence Ministry staff continue to be a challenge.
“Right now our main base is at the Asha Stevens School, but we understand that school is to start back on October 2. Therefore, we will move out of the school before that date. Most properties are destroyed, but most of our team members are staying at different properties/hotels on island,” said De Vries.
Military personnel have no end date while on deployment, but as the security situation on island stabilises, Marines will be slowly relieved and sent back to the Netherlands.
“We do not want to take any security jobs in St. Maarten. We have a job to do now and that is to support police and protect the public. By the Airport, when their security guard comes in to work, I make sure to pull one of my guards from guarding,” said De Vries.
“The marines are grateful and appreciate the opportunity to assist the people of St. Maarten during these difficult times. For me, it is always good to help people. We had less than 24 hours to deploy to the island while in Holland and we left our families and lives to come to the island to assist. We are happy that we are here and the rebuilding process will be done by the Government of St. Maarten.”