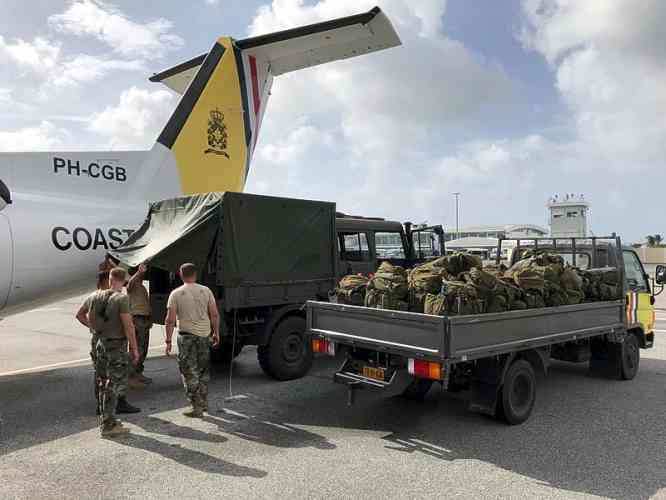 PHILIPSBURG–Dutch military from the 32nd Raiding Squadron left Aruba for St. Maarten Tuesday and Wednesday. At the request of Country St. Maarten, the military will support the local emergency services in the coming days before, during and after the passage of Tropical Storm Isaac.

Together with the Marine Detachment in St. Maarten, a total of 73 military from the Royal Dutch Navy in the Caribbean are ready to support local emergency services in the preservation or restoration of public order and safety.

This will be done, among other things, by joint combined patrols together with and under the leadership of the Police Force of St. Maarten KPCN. The role of the Dutch military in this is to ensure security, the Royal Netherlands Navy stated Wednesday.

Station ship Zr. Ms. Friesland is currently in Curaçao to prepare itself by taking emergency aid packages on board and making itself ready for possible emergency-aid deployment.

At this point in time it is not possible to say whether the Dutch Navy will also offer emergency aid to other, non-kingdom islands, such as, for example, Dominica.
If an independent island or country makes a request for emergency aid, it is up to The Hague to determine whether members of the Ministry of Defence will be deployed for this purpose, the Navy said Wednesday.

Providing emergency relief after the passage of a hurricane is one of the main tasks of the Royal Dutch Navy’s units in the Caribbean. The assistance provided on request is aimed at assisting local emergency services with personnel and equipment in carrying out their duties, to get public life back on track as soon as possible after the passage of a tropical storm or hurricane.