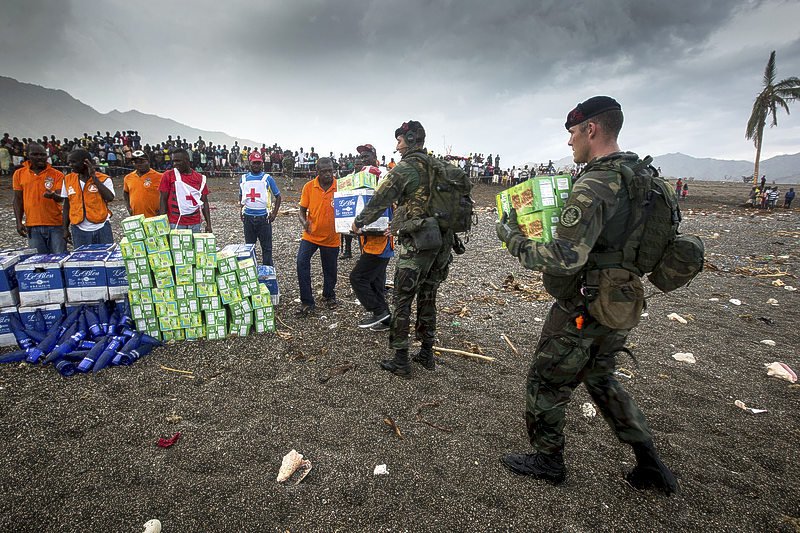 THE HAGUE–The Dutch military emergency assistance to Haiti following the devastating Hurricane Matthew has come to an end after two and a half weeks. Countless boxes of water, rice and other food, blankets, and tarpaulins were distributed and a lot of construction material.

The Dutch Navy ships Zr. Ms. Holland and Zr. Ms. Pelikaan brought 450 tonnes of emergency goods on shore to help alleviate the needs of tens of thousands of Haitians who were badly affected by the hurricane.
The patrol ship Holland and the support ship Pelikaan brought the goods to places that could not be reached over land, mainly the West coast where Matthew caused the most destruction. Many of the goods, also of other relief organisations, were brought to shore with smaller rigid hull inflatable (RHIB) boats in areas that could not be reached by larger ships.
Providing emergency assistance after a hurricane is one of the main tasks of the Dutch Defence in the Caribbean. The objective in Haiti was to alleviate the human suffering and to create a solid base for other disaster relief organisations which can continue the work.
Additional personnel was added to the regular crew of the Navy ships Holland and Pelikaan. Dutch Marines from the squadron in Aruba assisted with the security aspect of the emergency goods transport. Specialists of the Dutch Army worked on clearing areas of destruction and helped to rebuild.
Medical specialists assisted the local population in need of medical care. Hydrographic experts of the Dutch Navy researched the seabed for obstacles to create a safe navigational route for the navy ships and inspected mooring facilities for damage.
The Dutch military worked in close cooperation with the Haiti Government, the World Food Programme and organisations such as the European Union Civil Protection Mechanism, a coordination team with experts from different countries. Coordination with the United Nations (UN) ensured that the goods arrived at the right places.
In several areas, the shallow water depth prevented the large Navy ships from mooring close to land. Smaller motor vessels were used to bring the goods on shore. The goods were loaded in Port-au-Prince and Les Cayes. The Dutch Navy ships are on their way back to their Caribbean main base in Curaçao.