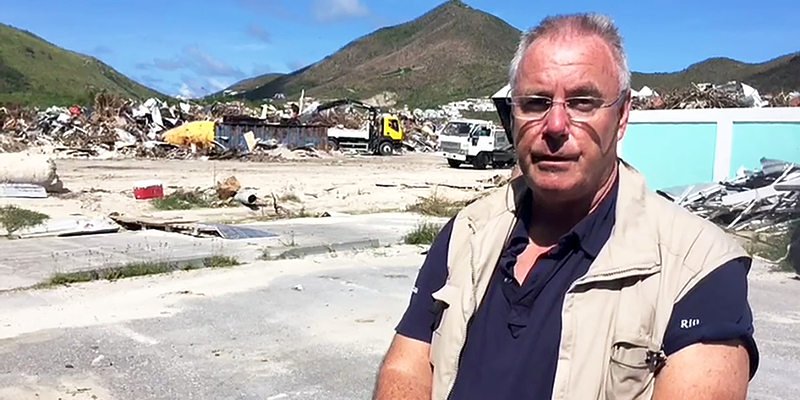 PHILIPSBURG–The Rijkswaterstaat division of the Dutch Ministry of Infrastructure and Environment (I and M) also is assisting in the rebuilding of St. Maarten after Hurricane Irma, which caused household debris and building material to spread all over the island. Workers have come out in force to remove the debris from the streets.

Ruud de Krom of Rijkswaterstaat discussed about the mess, the garbage and the repairs on the island on the Ministry of Infrastructure’s website,
“The debris on the streets is posing a risk to public health. The heaps consist of rotting garbage and rats can make it a breeding ground for pathogens. The relatively high temperatures and high humidity are speeding up the rotting process of organic material and contribute to this risk,” De Krom said.
“The Government of St. Maarten and the Ministry of Public Housing, Spatial Planning, Environment and Infrastructure VROMI cannot give any estimate of the amount of debris as yet. To limit the risk, Government has deployed several hundreds of workers and lots of material to remove the debris as soon as possible.”
Four temporary depots have been created for the storage of waste. The waste collected from the surrounding neighbourhoods is brought to one of these depots. Subsequently the refuse will be transported to the central depot for processing.
“Besides, there is the already-existing garbage dump where garbage from the island will be stored first,” De Krom explained.
“The residents of St. Maarten show much resilience where it concerns the clearing of debris and the handling of the situation. All over the island the inhabitants are busy collecting waste and taking it to the different depots with their own means. They are working together in full force. Every day the difference is visible. Yet, it will still be quite a challenge to make the neighbourhoods and their surroundings clean and safe again.”
De Krom said the Government of St. Maarten had made a list of the required assistance. The Netherlands sent expertise and aid to the island. The Ministry of I and M, for instance, made two garbage trucks available, as well as other waste-management trucks.
“The material will be extended with a so called ‘waste train’ consisting of sweeping carts, small excavators, trucks and a vehicle for disinfection, which will be driving behind each other to clear waste,” De Krom said.
Part of the waste train arrived Saturday on board an Antonov aircraft. “It was quite a challenge to get all the material on board the aircraft. The Antonov was fully loaded. Someone at the Ministry of I and M made sure everything was sent to St. Maarten. The remaining material will be arriving by ship from Curaçao because not everything could be loaded on the aircraft.”
De Krom said it is expected that the waste train will be fully operational soon. In the meantime, personnel are being trained in the use of the sprayer and routes are being explored to deploy the waste train as quickly and effectively as possible. “That is one of my points of attention,” he said.
The Ministry is also involved in repairing the kilometres of security fences around Princess Juliana International Airport SXM. “Air traffic has to find out for itself how to depart or land at the airport, because the landing lights and air traffic control are not working. Captains, therefore, have to use their own eyes and hands to land the aircraft. We are very busy in restoring the situation,” De Krom explained.
Another point of attention is the provision of drinking water. I and M sent small water factories known as reverse osmosis units to St. Maarten, which have been installed at several distribution points on the island.
“It is the expectation that the first cruise ships will be berthing in St. Maarten on November 1. With many tourists on the island you need more drinking water. As for me, I cannot imagine coming here as a tourist now. There are no leaves on the palm trees anymore,” he said.
It is not yet known when De Krom will be leaving St. Maarten. “The arrival of the boat with the waste-train material and the flights to Curaçao are the decisive factors,” he said.