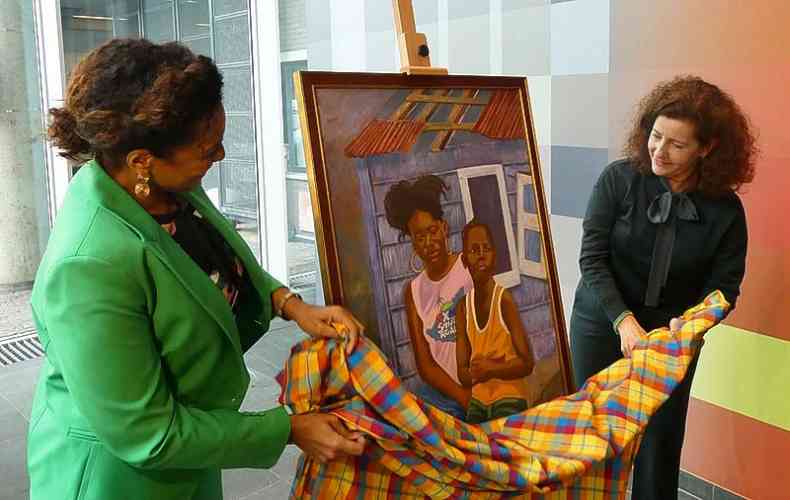 THE HAGUE–Reaffirming its support for St. Maarten, the Dutch Ministry of Education, Culture and Science OCW is dedicating much attention to the reconstruction after Hurricane Irma and the resilience of the island’s people.

The front of the large ministry in The Hague has been decorated and information provided about the hurricane and the island’s recovery. People exiting the central station in The Hague can hardly miss it: the ministry’s front, located right across from the large train station, has been decorated with colourful panels depicting how the island is recuperating after the devastating storm in September 2017.

Passers-by can read a poem of St. Maarten’s famous artist Ruby Bute and information about the hurricane and the reconstruction. Also, flying in front of the building is the St. Maarten national flag.

Main reason for the façade’s decoration is the art piece “Winds of 185 Miles,” painted by Bute. The painting, donated to the Netherlands and its people to say thank you for all the assistance St. Maarten received after the hurricane, is on display at the ministry for six weeks.

Bute’s painting, which shows a mother and her son in front of their damaged home after the hurricane, has been touring through The Hague for the past few months. It has already been displayed at several ministries, including the Ministry of Home Affairs and Kingdom Relations BZK, as well as the First Chamber of the Dutch Parliament and the Council of State.

St. Maarten Minister Plenipotentiary in The Hague Jorien Wuite has been at the forefront of the presentation of Bute’s painting throughout The Hague. On Thursday it was the turn of the Ministry of OCW. Wuite and Minister of Education, Culture and Science Ingrid van Engelshoven together unveiled the painting.

Wuite used the occasion to thank the ministry for its loyalty and support after the hurricane by assisting schools on the island to reopen. The ministry had tents equipped as classrooms and it also sent educational material. At the time of the hurricane, Wuite was minister of Education in St. Maarten and she was closely involved in this process.

“I am glad to hear that our assistance was well-received. Every country has its own responsibilities, but helping each other out after such a large disaster is a given. At such a moment, the Kingdom is as the Kingdom should be,” said Minister Van Engelshoven, who during her visit to St. Maarten in February 2019, had a personal encounter with artist Bute.

After the public display of the painting at the Ministry of OCW, “Winds of 185” will go to its last temporary home: the Second Chamber. It is the intention that Bute herself will be present at that unveiling ceremony.