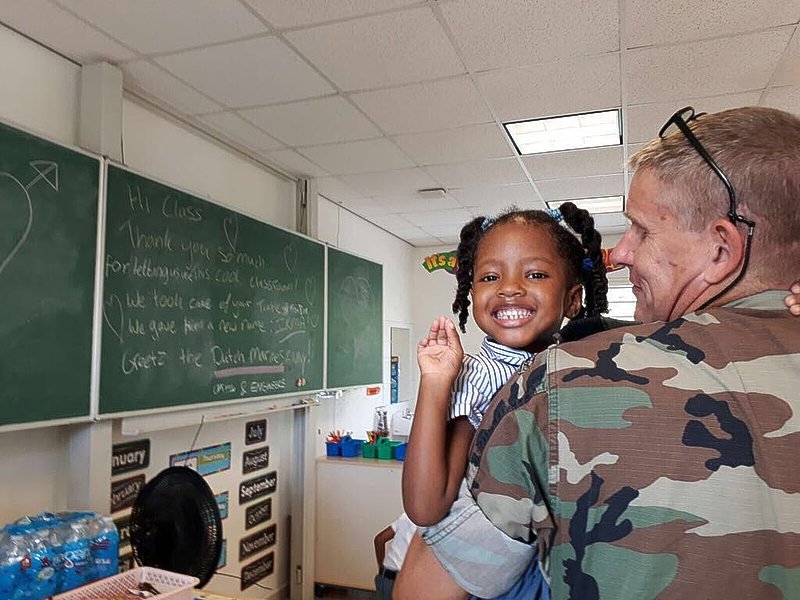 PHILIPSBURG–St. Maarten, more than a month after monster Hurricane Irma, is still in the emergency response phase, but is steadily working to reach the recovery phase when rebuilding will take precedence, said Head of the Dutch Civil Mission Erwim Arkenbout.

Being in the response phase at this juncture in the post-Irma timeline is “normal” and does not in any way take away from the progress the country has made since Irma, Arkenbout told The Daily Herald. “We are still here to help. The Netherlands is very committed to help with the right recovery plan.”
The reopening of Port St. Maarten and Princess Juliana International Airport SXM were milestones since Irma, as were the reopening of schools and security on the streets. The Mission is happy to have had experts give freely of their expertise to achieve these re-openings.
“It is not perfect yet. There is still a lot of work. The damage is considerable and will take years to fix,” he said.
The people of the country “appreciate the help” and this is visible in the way the population responded and reached out. “There are so many opportunities here. … It is time to put your shoulder under the burden,” he said.
For Government, Arkenbout said, “Now it is the moment you are responsible for your people and it is useful to communicate. Let’s put differences aside and work together” to rebuild the country. “Let’s us cooperate and think of the people of St. Maarten.”
The devastation right after the storm was “shocking to see. … What is inspiring is the mood of restoration … the drive to rebuild St. Maarten for its people. This has really inspired me.”
The Royal Dutch Navy logistics ship Karel Doorman will be back in the coming weeks with more supplies for the country’s schools and to tackle the housing shortage with a number of “shelter homes.”
All of the supplies and assistance rendered by the Netherlands so far has been “on the house” and will be covered by the Dutch Government. “There is no bill for this emergency response phase,” said Arkenbout, echoing what Dutch Kingdom Affairs Minister Roland Plasterk had communicated to Prime Minister William Marlin.
Government was asked to make a list for the Mission immediately after the hurricane. “We tried to meet them [the items on the list]. Of course, we have to be somewhat critical, because there is the Dutch taxpayer to think about,” Arkenbout said.
When it became clear the storm would hit St. Maarten a team was assembled by the Ministry of Interior Affairs and Kingdom Relations to respond as soon as it was clear what was needed on the ground.
Limited information seeped out of the country, primarily via social media, after Irma struck the country. With that limited access the team was able to piece together what was urgently needed on the ground and mobilize the delivery of relief supplies.
The first assessment of needs led to a visit to the country by King Willem-Alexander and Plasterk to understand the challenge first-hand.
Rapidly after that, the decision was made to put together a team of experts to aid in the response and recovery process. This became the Dutch Civil Mission, headed by Arkenbout. The team moved to make its own assessment of the situation on the ground.
“We found that people were in a dire situation [following Irma – Ed.]. We wanted to help and we offered this to the Prime Minister,” Arkenbout said.
That help was accepted and through it came support for reopening of the Port and Airport, additional security at the prison, organising of food and water, and the flying and shipping in of in-demand equipment.