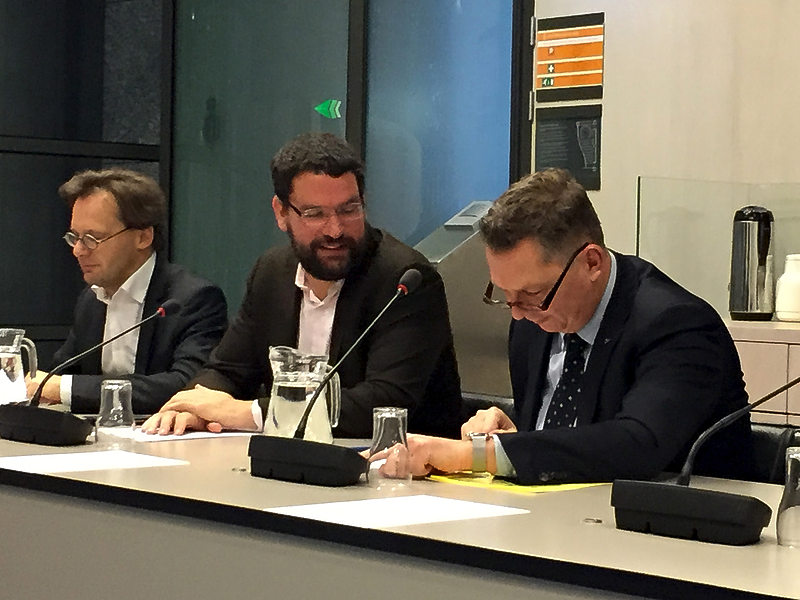 THE HAGUE–The garbage dump in St. Eustatius and the waste that has washed into the sea and onto the beach with the recent heavy rains has the concern of Members of the Second Chamber of the Dutch Parliament Roelof van Laar of the Labour Party PvdA and André Bosman of the liberal democratic VVD party.

Both Members of Parliament (MPs) submitted written questions to Minister of Home Affairs and Kingdom Relations Ronald Plasterk and to Minister of Infrastructure and Environment Melanie Schultz van Haegen-Maas Geesteranus on Thursday.

The MPs have taken note of reports in the Dutch Caribbean and the Dutch media that the heavy rains of the past weeks have washed the garbage onto the Zeelandia Beach and into the sea. As a result, the beach and the sea close to the beach have become severely littered. An article in Tuesday’s Trouw newspaper with headline “In St. Eustatius the fridges are washed into the sea” caught the attention of the MPs.

The Trouw article described how garbage in St. Eustatius is dumped in a shallow valley close to the sea. Usually the garbage stays put, if the wind doesn’t blow too hard. But in case of heavy rain, the rubbish is washed outwards. The St. Eustatius National Parks Foundation Stenapa is highly concerned about the situation and the deficient waste management system in general.

Van Laar asked Ministers Plasterk and Schultz van Haegen-Maas Geesteranus what exactly took place in St. Eustatius and what the extent of the environmental damage was. The MP wanted to know if it was correct that the garbage was dumped in a location where the rubbish could blow and wash into the sea. “If so, do you agree that this is completely unacceptable from an environmental and public health point of view? If so, what will you do about it?”

A brand-new garbage recycling facility which includes a small incinerator located near the airport is not in use. It is being reported that the facility has been sitting idle for a few years because the local Government refuses to train personnel to operate the installation.

Bosman and Van Laar inquired about the reason why the waste management facility hasn’t been put into use. “Can you explain what agreements are in place? Can you explain why the Island Government refuses to train personnel to operate the facility,” asked Bosman, who also wanted to know who had paid what to construct the installation.

Van Laar asked the Ministers how they would make sure that the waste facility would become operational within the shortest possible time. “Are you willing to, in cooperation with the Kingdom Government Representative, engage in talks with the Island Government to make sure that it takes its responsibility as soon as possible to get the installation operational.”

As was reported in The Daily Herald earlier this week, Stenapa has planned a clean-up action for today, Friday. Van Laar asked the Ministers whether the environmental damage as a result of the garbage on the beach and in the sea would be cleaned up as soon as possible.